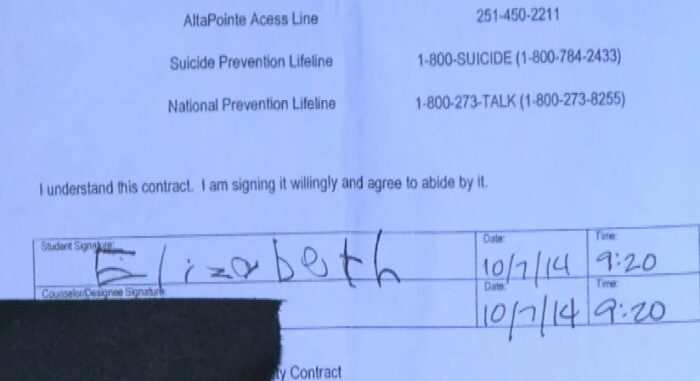 This ranks right up there with some of the most ridiculous things we’ve heard school officials doing over the past few years. If there is an award for obscene overreaction, it should go to this school’s principal, Katryna Kinn.

A 5-year-old student was in class at E.R. Dickson Elementary School when she was apparently found drawing something that resembled a gun.

“They told me she drew something that resembled a gun. According to them she pointed a crayon at another student and said ‘pew pew’,” Rebecca explained.

This was apparently enough to set off alarms and to have the school principal sit down with the 5-year-old girl and have her — wait for it — sign a contract that says the girl won’t kill herself or others.

Read that again, and then realize that a principal of an elementary school is responsible for this. A person, who’s job is to watch over children all day to ensure their safety by making sound decisions, required that a child sign a contract that says she won’t commit suicide or murder after drawing something that looks like a big bad evil gun.

Bearing Arms also covered this story and included a photo of the principal next to a large stuffed tiger (below). Then, one of the most brilliant comments was left by user John Fitzgerald: