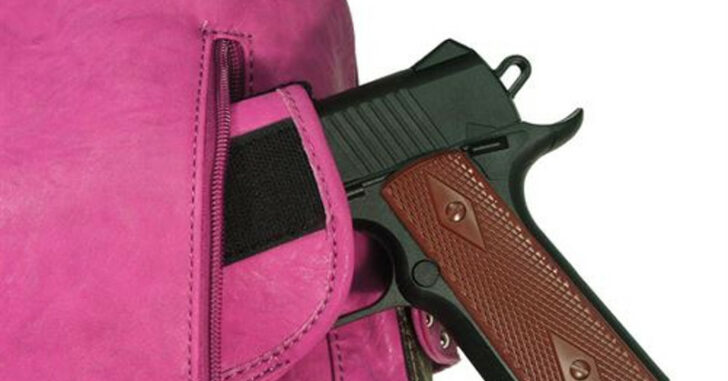 A lot of people – not just women – bring their concealed carry firearm along in a bag.  It’s become so common, Mississippi has decided to rule it’s not even considered a concealed firearm.

Unfortunately, it can be dangerous even if done properly.  That’s just flat up the honest truth.  A purse isn’t attached to you.  And if it gets snatched up by an attacker, you are S.O.L.

What if it’s your only option?  What if there is no conceivable other way for you to keep a firearm on your person?

Let’s take a blunt look at some case anecdotes.  What’s an anecdote?  It’s a story.  In these cases – they’re all true.  We’ll also discuss some advice from Carrie Lightfoot of the Well Armed Woman.  And at the end, you decide (and tell us!) can purse carry be done properly as a holster option?

Case #1: Purses Can Be Forcibly Taken From You With Little Effort

In the event you’re suddenly accosted, your primary concern switches from your safety to the safety of your bag.  Because now the thief can take more than just your money from it – he can take your life.

Example:  An off-duty NYPD officer gets her bag snatched by a thief in a parking garage.  She’s beaten mercilessly until he gets it free from her hands.  When he looks inside?  Surprise!  He’s won himself his very own semi-automatic pistol.

Surveillance video clearly shows her struggling to keep hold of the purse while the thief is smashing her face with his fists.  She’s more concerned with keeping that purse than she is with defending herself.  That’s why purse carry isn’t a good option.  Would an inside the waistband holster have saved her?  Probably not in this case.  When your attacker is already on top of you – it becomes a hand-to-hand combat situation.  At that point, all bets are off.  All bets.

“Women who are interested in keeping their purse secure should select a purse with reinforced steel straps.

Also, I recommend that you carry cross body because it’s a lot harder to pull the purse away or maneuver it out of your reach.

Case #2: The Wrong People Can Get Your Gun Out Of Your Purse

And the biggest problem is when someone gets into that purse without you knowing about it – now they have your gun.

Example:  A 2 year old got into his mother’s purse while she was shopping at Walmart and fatally shot her at point blank range.

Like with ANY concealed carry method – purse carry requires situational awareness at all times.  All times.  No exceptions.

A gun in a purse that isn’t making contact with you, isn’t secured to your body.  That means if you’re distracted (and we all get distracted), you’re not in physical control of your firearm.

“Keep your purse on your body all of the time – cross body preferred.  If this mother had done just this – it wouldn’t have happened.

Also, keep your purse out of reach of any unauthorized person.  If you can’t ensure it’s secured to your body, lock it in a file cabinet at work (as a last resort) or ideally a gun safe.  Put your gun on your body when you get home and change your clothes or put it in a safe when you get home or to office.

Lastly, consider getting a concealed carry pack – like a fanny pack – a purse that attaches to the body.”

Example:  A 3 year old fatally shot both of his parents when he pulled his mother’s pistol out of her purse.

Most people react when touched by strangers.  A purse isn’t nearly as sensitive.  But above both of these things: complacency kills.

“All concealed carry requires changes to lifestyle.  This is especially true when dealing with children.  That’s why it’s important to have a secure compartment within your purse and always make sure the purse is slung cross-body and stays in contact with you at all times.

Treat your concealed carry purse like you would a newborn baby.  It is as a always with you, always in your sight and never unattended.”

In one recent example, an off-duty San Diego deputy dropped his concealed carry pistol on an airsoft pistol course.  When a 10 year old correctly identified that, indeed, he was looking at a live pistol laying on the course, he attempted to return it to a range control officer.  That’s when it negligently discharged in his hand.  Thankfully, no one was hurt and the pistol was secured.

It doesn’t matter if it’s a purse, a car, or a holster – complacency is the leading cause of lost and stolen firearms.  We get too used to our environment and we just assume every day will be like the last.

The ATF estimated close to 190,000 firearms went missing or stolen in 2012.  When a concealed carrier willingly or unwittingly allows his or her firearm to go missing – due to theft or otherwise – he or she is putting the whole community at risk.

The final takeaway is that a purse is less secure than a high-retention inside or outside the waistband holster but it’s not the culprit for these cases – it’s the person who loses control of the firearm.

What If Purse Carry Is My Only Option?

Of course we want people to carry, and purse carry (or bag carry or suitcase carry) may be the only method for them at a certain time. The stress point is this: if you can carry by using another method, such as IWB, do that.  But whatever you do – don’t become dependant on complacency – ever.

You can get your purse snatched and you can get your firearm snatched from your holster.  It’s possible.  What reduces that possibility from happening is situational awareness.

Do you think purse carry can be a responsible option for carrying a concealed firearm?  Let’s talk about it in the comments section below!