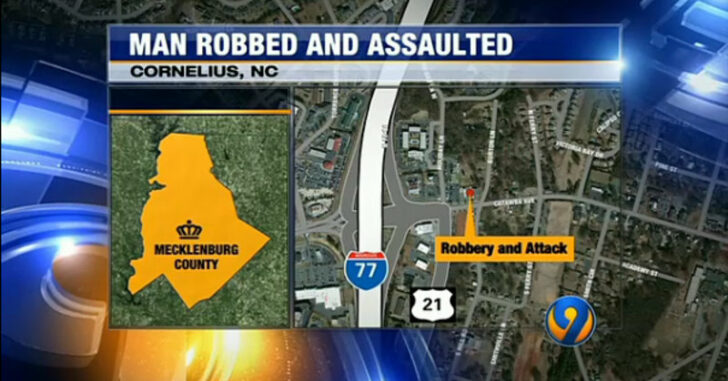 CORNELIUS, NORTH CAROLINA — An unnamed gun owner stepped in to stop the brutal beating and robbery of a man at a gas station.  Late at night, Fernando Torres was filling up his tank when a man reportedly came behind him and demanded his money.  When he told the robber he didn’t have any, the man started brutally hitting him and threatened to kill him.  According to WSOC, an armed customer stepped in and fired a single shot at the robber.  The robber quickly left, leaving Torres in recovery for that heavy beating.

Surveillance footage from the gas station failed to reveal any identifying features about the robber and police are continuing to search for any clues as to his identity.

To the gun owner who stepped in — bold move.  Obviously, something needed to be done and unfortunately, armed thugs don’t seem to care if a fight breaks out next to a gas pump.  If that single shot was judiciously placed, hopefully that thug will have something to remember this incident by.

This incident reveals a reality that concealed carriers may face: battle conditions are never ideal.  As we see here, a man is getting beaten next to a gas station pump.  If aiming is not judicious, we could jeopardize more than just the victim.  Yes, there are emergency shut-off valves equipped in almost every gas station in America — who wants to find out if they’re up to code or not?

Obviously, the battle is dictated first on your own safety and secondly on environmental conditions.  Stepping in to defend the life of a third party is a wonderful thing so long as you’re equipped to handle it.  Putting your own life in danger is a hazard in any self-defense situation — make sure those hazards are minimized by being aware of your environment.

To the gun owner who stepped in to save this man’s life?  Awesome job.