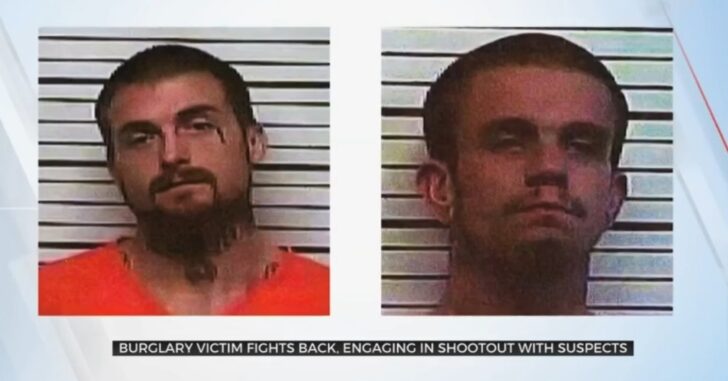 LOOKEBA, OKLAHOMA – A homeowner opened fire on two burglary suspects inside his home on March 22nd, according to Caddo County investigators. The man summoned deputies to his home on County Road 1140 in Lookeba after he noticed two suspicious men circling his home.

He also made another call to a family member, according to Caddo County Sheriff Spencer Davis, “He called his brother-in-law which lived down the road from him and told him he might want to come down because he is fixin’ to get burglarized.”

The pair fled in a vehicle, which the brother-in-law gave chase to, and he was also fired upon by the suspects through the sunroof. The suspects lost control and hit a tree, then fled the crash scene on foot. Citizens in the area called reporting seeing them in a nearby field.

Runzel surrendered shortly thereafter, with his partner choosing to be the subject of a manhunt that stretched on for hours before he also eventually surrendered to authorities in a field not far from the crash scene.

The Sheriff hopes both suspects learned a valuable lesson, adding, “I would not advise breaking into anything in rural Oklahoma because they don’t mess around. Somebody might end up getting hurt.”

With all due respect to Sheriff Davis, I doubt they learned anything. Turns out these boys have a lot in common: both are already convicted felons, and both were in possession of meth. Now both are booked for possession of a controlled substance, first-degree burglary and shooting with intent to kill.

Fortunately the homeowner was alert, situationally aware, knew what was fixin’ to happen, and took the appropriate actions by arming himself and calling authorities.

As for the brother-in-law, chasing down suspects is never recommended, and could have cost him his life. Being fired upon by the suspects, it’d only take one round on target to change the outcome drastically.

Previous article: Woman Shoots Man During Domestic Situation After He Becomes Aggressive Next article: Woman Arms Herself and Barricades Door As “Man Of Steel” Attempts To Break In, Because The Protection Order Didn't Work