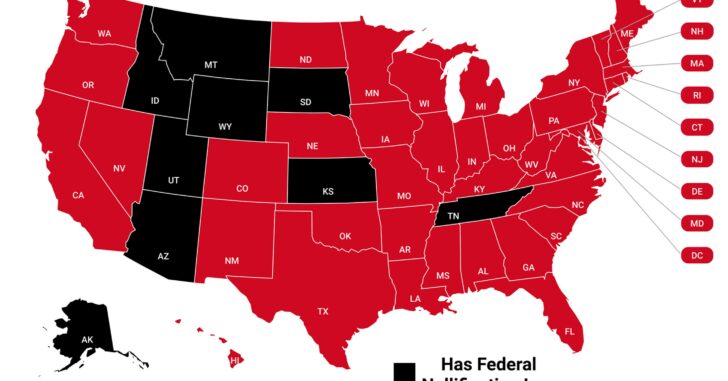 First, some background. Missouri would not be the first state to enact one of these laws, roughly 10 other states have enacted very similar laws in the past decade, and over 30 states have proposed similar laws. The fact that Missouri isn’t even among the first 10 states to do this makes the Sentinel’s description of the proposed law all the more curious. For example, Montana, Idaho, Utah, Wyoming, Arizona, Alaska, South Dakota, Kansas, and Tennessee all have their own versions of these laws on the books. The laws, often called “Nullification Laws” or “Firearm Freedom Acts” seek to make virtually all federal laws regarding firearms inapplicable within the confines of a particular state. The basis for doing this is that firearms made, sold or produced entirely within a single state are theoretically not subject to interstate commerce and therefore not subject to any federal regulation. For many reasons, some of which are discussed below, these laws do not, and have never, actually provided the protection they purport to provide.

The Legal Framework of Nullification Laws:

It is important to note up front that these laws have lost each and every legal challenge that they have ever encountered. I am not aware of a single time one of these laws has been upheld in court or provided any form of benefit to gun owners. I am, however, aware of many instances where otherwise law-abiding gun owners, including my own legal clients, have relied on these laws and found themselves being criminally prosecuted.

The Supremacy Clause of the US Constitution is found in Article VI Clause II and states the following:

In plain speak, the Supremacy Clause says when state and federal law conflict, federal law always wins. Legally this principle is called the preemption doctrine. Both Hamilton and Madison wrote a fair deal about the importance of the Supremacy Clause, with Hamilton noting,”[a] law, by the very meaning of the term, includes supremacy. It is a rule which those to whom it is prescribed are bound to observe. This results from every political association. If individuals enter into a state of society, the laws of that society must be the supreme regulator of their conduct. If a number of political societies enter into a larger political society, the laws which the latter may enact, pursuant to the powers entrusted to it by its constitution, must necessarily be supreme over those societies, and the individuals of whom they are composed.” (see Federalist No. 33)

This is why a state can’t simply pass a law that nullifies a federal law they don’t agree with, such as income taxes or regulations on firearms. That’s not how it works, that’s not how any of this works.

How The Courts Have Ruled On Nullification Laws:

The first firearm related Nullification Law passed in recent history was by Montana in 2009 (see Mont. Code Ann. § 30-20-104). Similar to the Missouri law, Montana’s version declared that a firearm or ammunition “manufactured … in Montana and that remains within the borders of Montana is not subject to federal law or federal regulation, including registration, under the authority of congress [sic] to regulate interstate commerce.”

A few years later in 2013 Kansas passed their own Nullification Law in the form of Kan. Stat. Ann. § 50-1204. Like all the other laws, the Kansas law made many promises it could not keep:

A personal firearm, a firearm accessory or ammunition that is manufactured commercially or privately and owned in Kansas and that remains within the borders of Kansas is not subject to any federal law, treaty, federal regulation, or federal executive action, including any federal firearm or ammunition registration program, under the authority of congress to regulate interstate commerce. It is declared by the legislature that those items have not traveled in interstate commerce. Kan. Stat. Ann. § 50-1204.

Two Kansas men, Shane Cox and Jeremy Kettler, relied on the promises made in the Kansas law and began manufacturing (in Kansas), transferring (in Kansas), and possessing (in Kansas) several unregistered firearms that would otherwise be subject to federal regulation, specifically homemade silencers. The two men said they could avoid the “red tape” of federal firearms regulations as long as the silencers never left Kansas. In December 2014, the Bureau of Alcohol, Tobacco, Firearms and Explosives (ATF) learned that Cox and Kettler were making and selling unregistered silencers and began an investigation. Within a year, federal prosecutors conducted an under-cover operation and secured a grand jury indictment against Cox and Kettler, charging them with thirteen federal crimes. The two men argued that they relied on the Kansas law for protection and did not know that it wouldn’t protect them from federal prosecution, even going as far as arguing entrapment by the state of Kansas. The court rejected their arguments and noted the proper role of the Supremacy Clause by stating:

“The defendants argue that Kansas’s adoption of the Second Amendment Protection Act … somehow rendered the National Firearms Act unconstitutional,” but “the Constitution could not be clearer on one point: if the National Firearms Act is a valid exercise of Congressional taxing power, and if it does not infringe on rights granted in the U.S. Constitution, then it is the ‘supreme Law of the Land,’ regardless of what SAPA says.”

At trial the two men were convicted of 8 felonies. They appealed their convictions and lost. Both are now felons.

This case is only one of many that highlight the problems with Nullification Laws. They do not provide you with the protection they purport to provide. The courts have soundly and unequivocally rejected them. If you rely on a nullification law to get around federal regulation, and get caught, you will be convicted.

Ignorantia iuris nocet (not knowing the law is harmful). Now that you know the truth about Nullification Laws please share with your friends so they too can avoid the potentially life-changing consequences of falling victim to the law’s false promises or the advice of the legally ill-informed.

There are over 20,000 state, federal and municipal gun laws in America. Legal Heat specializes in helping you understand these laws through their in-person and online classes, books and mobile phone app. Legal Heat offers CCW classes nationwide, and also publishes the industry leading Legal Heat 50 State Guide to Firearm Laws and Regulations which can be downloaded on iTunes, Google Play and Kindle App stores. You can purchase the paperback version of the Legal Heat 50 State Guide or sign up for a class by visiting www.mylegalheat.com or by clicking here.