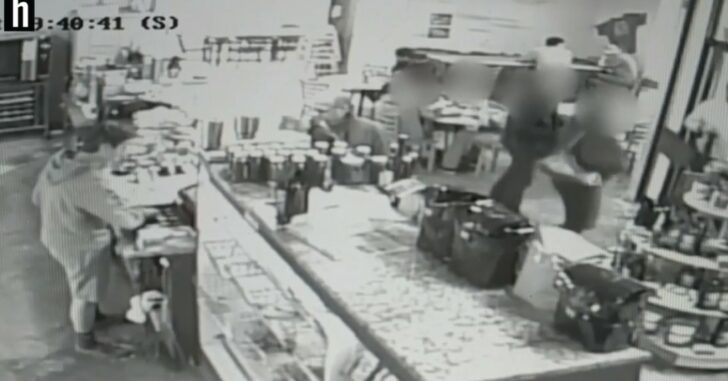 LAKE WYLIE, SOUTH CAROLINA — It was a quiet Saturday morning at the Bagel Boat, a popular restaurant in a small South Carolina town. Video surveillance shows people sitting down and enjoying their food, people being helped at the counter, and nothing seems out of the ordinary.

Then, what news articles are calling accidental, when it’s actually negligence, a man seated at one of the tables loses his gun. It falls out of his sweatpants pocket and onto the floor.

And it hits someone in the leg that was walking by.

My friend lives in this town and sent me a link to one of the articles and the video. “Did you see this yet?”, she asked. I told her that this is the first I’m seeing it, and I added the link to my spreadsheet to report on.

Then, she added a little extra.

My daughter & dad were at the counter when this happened, just a few feet away.

Sure enough, there is her father standing at the counter, and her 6-year-old daughter is standing next to him out of camera view.

Here is the surveillance video;

I asked my friend if we could have a quick chat, because I wanted to hear about what was going through her mind.

I first asked her how she found out about it, and what her initial reaction was.

“Well, I found out shortly after my father brought my daughter back home. I was relieved that they weren’t hurt, but couldn’t help but wonder how things could have been different. My child is one who is usually hard to keep up with, constantly running around when she’s out with me. Typically, she’d be trying to run around in circles, and if she were at that time, who knows what could have happened.”

Then I asked her what her reaction was after seeing the surveillance video.

“I was angry. I didn’t realize just how close they were. In our town, lots of people carry guns, but I just can’t understand how this could happen. He just had it in his pocket with no holster? How did it fall out? What was he thinking? This could have been so much worse. And on top of that, he didn’t commit any crime, so there is no accountability?”

We started talking about proper ways to carry a firearm, and things that are a big no-no. Unholstered carry is one of those things.

It’s difficult, if not impossible, to tell in the video if the gun had a holster or any type of trigger protection. That, however, doesn’t seem to be the issue here. This particular gun, which we have no clue what it is, seems to have discharged from the impact when it hit the ground.

That does happen, although it shouldn’t with any (most) modern firearms.

Still, the gun should be holstered.

But maybe the most important thing of all; It shouldn’t be in a place where it can fall out like that. This is the part that is completely unacceptable.

As for accountability, I’m near certain that this man will likely face a lawsuit of some kind. But what about from a legal standpoint? Should people who have something like this happen be responsible for taking a safety course? Should they have their permit suspended and/or revoked? Should they need to show that they’ve made changes to becoming more responsible? Now we’re getting into 2nd Amendment territory, but they are valid debates nonetheless.