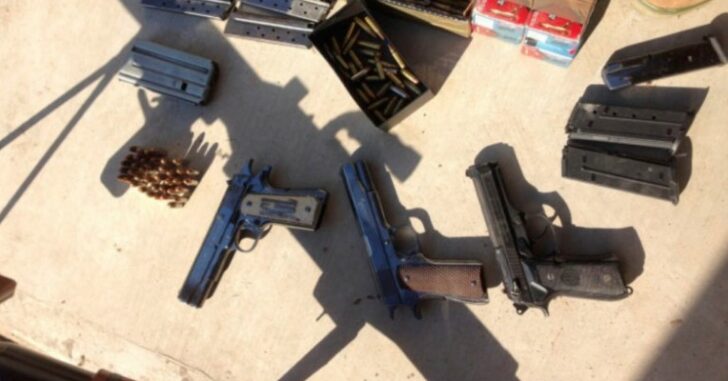 Cartel-driven violence has been an continuing plague in Mexico for at least a couple of decades now. It’s something we’ve written about scores of times going back to the beginning of TTAG.

Now, apparently out of ideas for ways to do something substantive about the daily bloodshed, the Mexican government is suing five big U.S. gunmakers over the flow of arms into their benighted country.

The lawsuit maintains that the U.S. arms manufacturers “are conscious of the fact that their products are trafficked and used in illicit activities against the civilian population and authorities of Mexico,” according to a document from the Foreign Ministry.

“Nonetheless, they continue to prioritize their economic benefit, and use marketing strategies to promote weapons that are ever more lethal, without mechanisms of security or traceability,” the statement continued.

Besides an unspecified damages claim, what exactly do the Mexicans expect the targeted companies to do about lawfully sold weapons that find their way across the border?

The lawsuit also seeks the adoption of tighter controls in sales and security features on weapons. It also wants the companies to undertake studies and media campaigns to prevent arms trafficking.

The suit notably doesn’t name the US Government as a target along with the manufacturers. That’s seems more than a little strange since the Obama/Biden Administration deliberately sent thousands of guns south of the border in the early aughts, guns that resulted in the deaths of hundreds of Mexican civilians and law enforcement agents. Not to mention US Border Patrol agent Brian Terry on this side of the line.

Fast and Furious, however, was relatively small potatoes in terms of the number of firearms that get into the hands of brutal cartel members.

Mexican authorities believe U.S.-made weapons have fueled the explosive violence that has transformed parts of the country over the past decade. Around 2.5 million illicit American guns have poured across the border in that time period, according to a Mexican government study released last year. Legal gun sales in Mexico are tightly restricted.

That’s a lot of firepower. But the vast majority of the guns are sold legally to the Mexican government for their military and security forces. Only a tiny fraction of the problem guns are bought here and illicitly transported south.

So Mexico’s real problem is internal. The lawsuit is the government’s way of diverting attention from the fact that the cartels there are armed, to a great extent, by guns that mysteriously fall off the back of Army transports and are sold out of Federal Police armories in the middle of the night.

From a report by the American Friends Service Committee . . .

Because of the depth of corruption in the Mexican government, police and armed forces blur the lines between official groups and criminals, and legal arms sales frequently end up arming criminal gangs and criminal conduct directly. Moreover, the Mexican police and military have a long history of repression against mostly peaceful social movements.

None of that is news. Mexican government corruption has been endemic there for longer than anyone can remember and as the cartels have grown richer and more powerful, it’s become easier for them to “persuade” and incent government officials to transfer materiel to them.

The exponential growth in [arms] sales to Mexico has not been accompanied by controls to track where the guns go or to ensure that they do not land in the hands of police or military units that are credibly alleged to have committed gross human rights abuses or colluded with criminal groups – the very groups that security forces are being armed to combat. Legally exported U.S. firearms have been used in massacres, disappearances, and by security forces that collude with criminal groups in Mexico on a broad scale.

The lack of controls attributable solely to Mexican officials. After the guns get to them. The guns are sold — legally — to the military and from there…well, it’s not hard to guess.

We’ve seen this movie before. Just as some American cities desperately and laughably blame gun stores and firearms manufacturers for their local law enforcement and criminal justice system failures, Mexico is now trying to pin the blame for their rampant crime problem on US gun makers. And so it goes.

And, BTW, the Mexican government is represented by the antigun group Brady United. @NSSF https://t.co/luucJHun53

Previous article: "Multiple People Down", Pentagon Police Officer Killed During Shooting Outside Department of Defense Next article: Why We Carry: 3 Employees Shot During Shift Change, Suspect Flops Like A Fish After Being Shot By Police