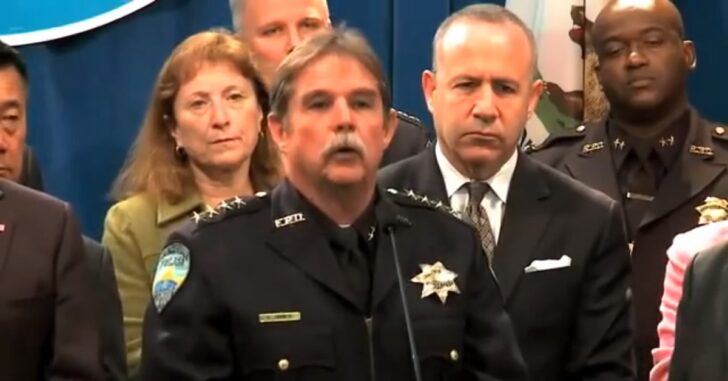 It’s no secret that California isn’t firearm-friendly territory. As armed citizens, we know the arguments made to enact gun control are deeply flawed, even with the best of intentions, and sometimes those arguments are completely insane.

In a video that could easily have broken the internet in 2013, former Emeryville Police Chief Ken James made a speech enumerating just what he thought about firearms, and I’ll warn you right now — it makes no flipping sense.

He doesn’t believe them to be defensive weapons because… reasons?

James made the speech, according to TheBlaze, during a press conference promoting strict gun laws in California.

Why, pray tell, is a tool that has been used to save literally millions of lives across the globe over the span of hundreds of years not defensive?

He doesn’t seem to know.

“A gun is an offensive weapon used to intimidate and show power,” James stated. Which… no, it’s not.

Anyone using a firearm for what is essentially showing off is doing the whole firearms thing wrong. Seriously. It’s hard to rebuff the claim because there’s no chain of logic to assail.

But what about cops?

Eh, they should keep their guns because… reasons?

“Police officers don’t carry a gun as a defensive weapon to defend themselves or their other officers. They carry a gun to be able to do their job in a safe and effective manner and face any oppositions we may come upon.”

You mean, they carry them to defend themselves and their fellow officers?

I mean, I can’t think of a single sane person, regardless of political persuasion or stance on gun control, that would agree with James.

But wait until he backs his claim up:

“If it was a defensive measure, why did we lose 55 officers nationwide last year to gun violence?”

Don’t get me wrong — 55 law enforcement officers lost is 55 too many, but to claim that 55 members of the thin blue line falling to gun violence is proof that gun violence is out of hand is just insane.

“And unfortunately,” he continued, “in just the two months of this year so far, we have lost two officers to gun violence in the state of California alone… We are asking and have been asking for reasonable regulations, not that are going to impact the legal gun owner.”

Yeah, it kind of seems like the guy was handed talking points and the local improv club was hired to help him back them.

And that’s coming from a guy that likes improv.

A firearm is a tool. It is morally neutral, and it is neither necessarily an offensive or a defensive one. That is entirely in the hands of those who wield these firearms.

And if you don’t know that, maybe you should never have been chief of police, Mr. James.

Previous article: *GRAPHIC* FL City Commissioner Fatally Shoots Thief, Internet Is Blowing Up With Objection To His Actions Next article: Handguns for Bear Defense: a Study by Caliber