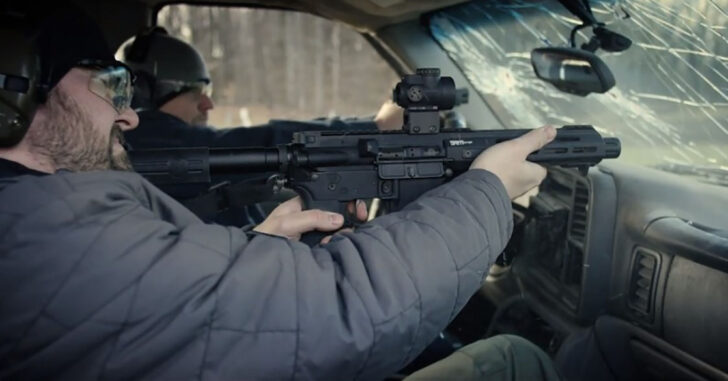 New for 2019, the SAINT Victor series of rifles and pistols from Springfield Armory are designed to give you everything you need on a premium defensive firearm, right out of the box.

Weighing in at 6.9 lbs, the lower receiver on the SAINT Victor rifle is Accu-Tite tension-bonded to a flat-top forged upper receiver and features a 16” CMV barrel that is Melonite® finished inside and out for the ultimate in corrosion resistance. The rock-solid, patent-pending M-Lok free-float 15” handguard protects the mid-length gas system and provides plenty of space for accessory attachment.

At the heart of SAINT Victor rifles is an M16 bolt carrier group that is also Melonite® finished, HPT/MPI tested, shot peened, and houses a 9310 steel bolt. With a fit, finish and feel superior to that of much higher priced AR options on the market, the SAINT Victor rifle is also available in a California-approved model for 2019, with a Strike Industries Featureless Grip and Magpul MOE fixed stock. An 11.5” SBR configuration is also available for LE and civilian use.

The SAINT Victor pistols are the most compact in the lineup, with many of the same features of the rifles, but in a stock-free, non-NFA pistol form with a 7.5” barrel in 5.56, and a 9” barrel in .300 BLK.

The 7.5” SAINT Victor pistol is equipped with an SA Forward Blast Diverter muzzle device, and the 9” pistol features an A2 flash hider, easily removed for suppressor use.

Just like the SAINT Victor rifles, the M16 bolt carrier group is precision-machined from 9310 steel, shot peened, HPI/MPT inspected and finished in super-hard Melonite®, as are the barrels, both inside and out. A staked receiver end plate features a QD mount for sling attachment.

The SAINT Victor series of rifle and pistols from Springfield Armory set a new standard for what you should expect from a defensive firearm.

Now available in these configurations:

Previous article: #DIGTHERIG - John and his Sig Sauer P365 in a Vedder Holster Next article: FL Principal To The World: If You Come To My Campus To Kill, YOU Will Be Killed