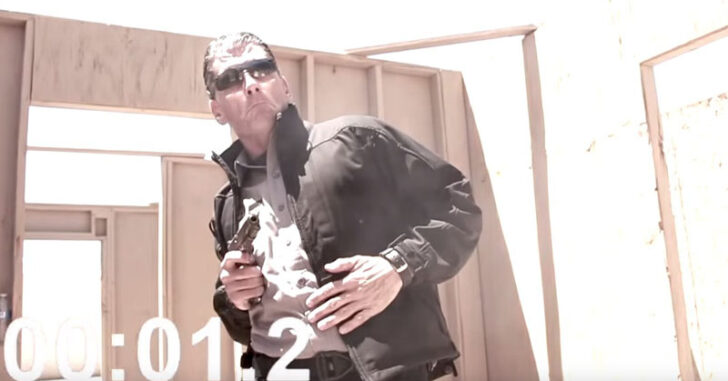 Front Site is right: the average number of attackers in a gunfight is two. And handgun rounds aren’t the super-deadly one-shot killing machines you see on TV; shooting someone with a pistol – any pistol – is no guarantee that they’re going to stop attacking you or other innocent life. The key takeaway here: don’t stop scanning for threats after you discharge your firearm in self-defense. But it’s not as easy to train yourself to do that as Front Site would have you believe. In the video . . .

we see Front Site students learning to look left and look right after they shoot a gun. In the example provided, the student turns her head but doesn’t actually LOOK for threats. Why should she? She’s at Front Site. There are no other threats. For safety’s sake, all the threats are downrange. Always.

An equally important but little discussed barrier to best practice post-shooting scanning: the natural tendency to focus entirely on the person you just shot. Why? Because they are a threat (as opposed to someone you ca’t see who might be a threat). You want to make sure the person you shot is no longer a threat. More than that, it’s fascinating.

I assume you’ve never shot anyone before. Neither have I. But I’ve seen people who were freshly shot and it’s quiet something to see – in a horrible, grisly sort of way. When your eyes see something incredible, your brain wants to know more. You stare. In a high-stress situation, when time is distorted, you may stare at the bizarre longer than normal. Certainly more than is safe, given the multiple attacker stat above.

To train yourself not to stare at the recipient of your ballistic assault: look away.

Note: LOOK away, not TURN away. Practice LOOKING away from the target and at your environment when you turn your head after shooting. Some trainers hold numbered cards away from the shooter, and ask the shooter to call out the number. That’s great but most people practice shooting without trainers. The trick here is to SLOW DOWN. A lot. Take at least five seconds to look in each direction.

In an actual defensive gun use, time will seem to move slowly. You will be moving quickly when you think you’re moving slowly. In other words, don’t worry that you’ll be training yourself to move your head too slowly when push comes to ballistic shove. You won’t. The more smoothly and deliberately you move your head the faster and more effective your defensive gun use scan will be. Smooth is fast, as they say.

Also keep in mind that it’s boarding house rules: everyone gets firsts before anyone gets seconds. You need to shoot as many bad guys as possible before you worry about whether or not you’ve shot any particular one effectively. So you need to scan after firing. Not only for bad guys but also for a new defensive position.

The cop in the video moves to concealment quickly. Good one. Only what if the bad guys started firing back/attacking in earnest? The checkout lane’s restricting him to moving either forwards or backwards. That’s not ideal but you play the cards your dealt. The question is, is he ready to move? The question is, after you’ve shot and moved (or shot while you moved) where do you go next?

Simulating that challenge on a square range is nigh on impossible. About the best you can do: turn your head – keeping the gun pointed down range (another training problem) – and look at the exit door. Remember: you’re not a cop. Your goal is to stay alive. If you’re alone, you want to leave the scene as soon as humanly possible. Above all, you want to escape. Look for more cover/concealment and a way out.

There is no perfect gunfight. Sometimes you do things you shouldn’t have done. But always remember that movement is your friend, and it ain’t over ’til it’s over.

Previous article: Should People Be Required To Know The Concealed Carry Laws Before Getting Their Permit? Next article: THE PLAN, PART 1: Having a Team Plan, At Home