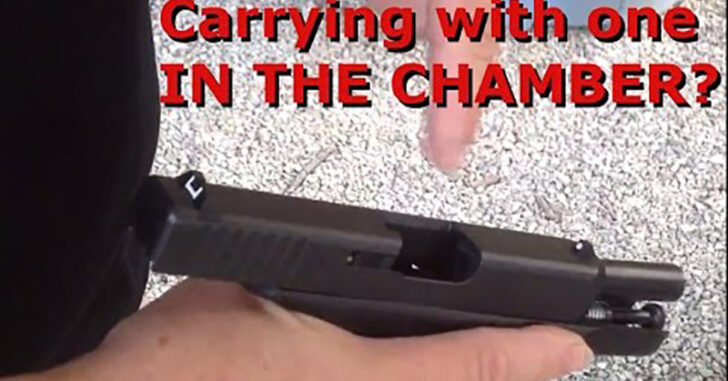 “I’m just so uneasy about the gun going off.”
“What if I sit down and it accidentally goes off?”
“What if I snag the trigger while I’m walking?”

These are all concerns that so many people new to concealed carry express when asked if they carry with a round in the chamber, or Condition One. Sure, you have a potentially lethal weapon on your person, so having a healthy dose of the jitters is natural. In fact, you should be more worried if you aren’t feeling at least a slight twinge of anxiety when you attach a loaded firearm on your body. A tiny amount of fear can keep you from being careless.

But, you still don’t feel confident carrying with one in the chamber? Ok, fair enough. Think of this. Guns are inanimate objects and do not simply “go off” by themselves, right? Just about every handgun I can think of, especially the more popular models, have multiple safety mechanisms built in so that the gun will only fire if the trigger is depressed. Yes, even Glocks and M&Ps! Think about it. These major manufacturers have made every known effort to make sure their products are safe. Glock, Ruger, Smith & Wesson or any other of the major companies have invested vast amounts of money and would have far too much to lose by putting a product out there that they didn’t feel was safe. I guarantee, they have put their guns through far more punishment than any of us would ever dream of trying. Bottom line: don’t touch the trigger and the gun will not fire.

So we’ve established that the problem isn’t with the gun taking on a will of its own, so the other piece of the puzzle could be your confidence in your holstering system. Does your holster completely cover the trigger guard? Does it keep your firearm secure regardless of your movement? If not, you should consider upgrading your holster. Life is too short for bad holsters! There are great name brands out there. Do just a little research or ask around. Take a look at the Digtherig posts. You’ll see some good holsters posted..

Lastly, are you confident removing your gun from the holster safely? This concern may be at the center of the problem. Having to remove or return your loaded firearm to a holster safely can be a bit daunting if you don’t have confidence in your skill level. The fix for this is pretty simple, however. Practice drawing and holstering daily with an unloaded firearm. Lots of reps will teach your muscles where everything is without looking.  Just practice those fundamentals of a good draw and safe reholstering.

Still wary? Well think about this. The average critical incident takes place between 3 and 7 seconds. By many standards, that is even a pretty kind estimate. Try a simple test when you’re at the range. You’ll need a shot timer app from the app store. They’re free and work surprisingly well. From a low ready position, time yourself to see how long it takes to rack the firearm and put shots on target. Then, try racking first, and starting at the same low ready position. Even shooters who are extremely fast at racking and getting on target will take around a half second to a second to get the firearm racked and on target. That half second can be an eternity in a critical situation.

When I was new to carrying daily, I was scared of a loaded firearm, too. It took me a little time to ease my way into a comfort level of knowing I was carrying in Condition One. Once the emotional side of my brain caught up with my reasoning side, I realized that NOT carrying with an empty chamber was the manner in which these guns were designed to be carried, safely. An empty gun doesn’t do you much good if you need to fire it in under 2 or 3 seconds, especially if you are under extreme duress in a critical situation. Keep in mind that during an adrenaline dump, you’ll lose control of your finer motor skills. Your hands will seem like baseball gloves, and racking your firearm or even thinking to do so may elude you when your body is in this fight or flight mode. All you have to rely on is your training  because your body will be on auto-pilot.

Ultimately, the decision is yours. I urge you, however, to look into some of the information that’s out there, including our video, that will show you the difference between carrying chambered and empty, as well as the videos that demonstrate just how quickly a deadly force incident can start and end.