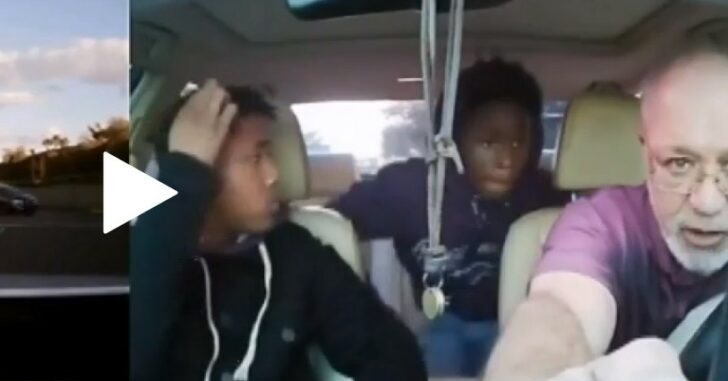 UPDATE: Two teens have been arrested in connection with the attack.

LAS VEGAS, NEVADA — I have a hard time with Uber’s policy of not allowing any of their drivers to carry firearms, because we see Uber related situations like this all the time.

These two kids are old enough to know right from wrong, yet they still both throw punches at a much older Uber driver.

And if there’s one thing that’s certain, it’s that a punch to the head can be fatal.

The driver, who asked not to be named, told FOX5 he picked up the men at an apartment near the city’s convention center last week and immediately noticed something was off.

After realizing passengers requested one rider through UberPool and the two were underage, he canceled their request and asked to leave the car.

When the driver asked them to get out of the vehicle, that’s when the young man in the back seat threw two punches to the driver’s head.

Thinking that it was funny, based on the facial expressions of the passenger, he decided to throw a punch of his own.

Watch the video of the incident below:

If they had been inside an Uber with an armed driver, there is a good chance that the driver would have drawn his firearm. And if you are a teen who thinks it’s ok to physically assault someone, then you’re old enough to face any armed citizens that you may come across.

The driver suffered a broken cheekbone, according to his son. The two teens are still being sought after by police, and we can only hope that they’re identified and arrested for their terrible choices.

It may be all fun and games to these two teenage thugs, but the fun and games will come to a quick halt once they choose the wrong target.

Previous article: The New Springfield Armory SAINT™ Edge Pistol Should Be On Everyone's Want List Next article: [WATCH] CA Business Owner Sleeps At Store After It Was Broken Into, And The Thieves Came Back