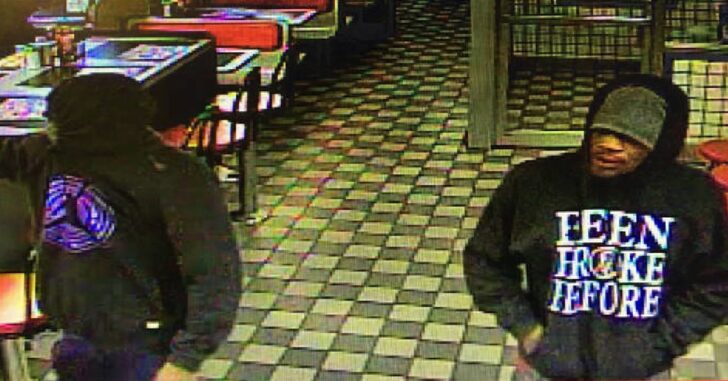 ACWORTH, GA — A pair of thugs were sent packing after they discovered the Waffle House they wanted very much to rob was not entirely helpless.

One of the customers inside was armed and ready to neutralize the threat.

Of course he was — it’s Waffle House, and it was 4 a.m. on a Saturday. It’s practically the Wild West out there.

Deputies say two armed men entered the restaurant and demanded money from the cash register. A Waffle House customer drew his own firearm, firing a round at the suspects, who then fled the business. Both robbers wore black hoodies one had a picture of a basketball player jumping and the other said “Been Broke Before” on the front.

Authorities say the suspects may have left the scene in a silver SUV. The suspects should be considered armed and dangerous, police say.

Gunfire at a Waffle House — is nothing sacred?

What’s pretty amazing here is the total lack of awareness by the two-bit thugs that tried to hold the place up.

If it was one person robbing the place, I could understand not being able to keep the room locked down.

But seriously — all these guys had to do was stand roughly back-to-back. That’s it. They couldn’t manage that, and they couldn’t stand the thought of someone having the drop on them — so outnumbering their threat they bolted.

This story goes deeper than that, however.

According to My AJC, these two are part of a trio of robbers who have robbed more than a dozen establishments since the beginning of the year.

Hopefully, authorities will lock these boys down soon before lives are lost.