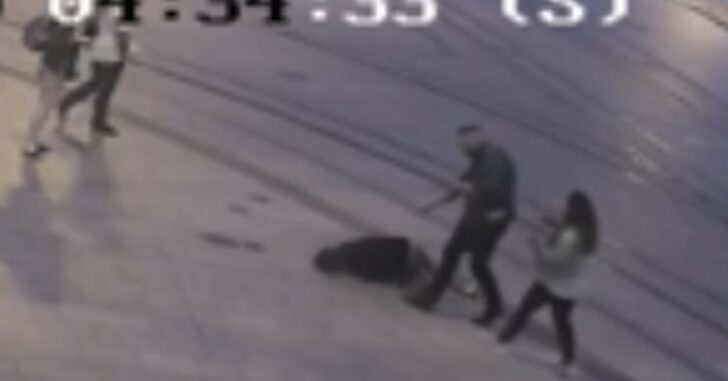 A man who was seemingly minding his own business was thrown into a situation where he attempted to protect a small group of women from an aggressive man on the streets.

The video shows the quick altercation, and the good guy in this case is punched, which makes him fall to the ground.

Once he’s on the ground and not fighting back, the bad guy gives him a strong kick in the head, effectively brain-damaging the man, who later dies from the injuries sustained.

If this isn’t a case of being able to legally draw your firearm and shoot, I don’t know what is. Many people believe that an aggressor needs to have a weapon in his or her hands for them to justify using lethal self-defense.

That’s not the case at all, as hands and feet can be just as lethal. A correct blow to the head with either of the aforementioned body parts can be a lethal blow.

Take a look at the video, but beware that it will be disturbing to some viewers. While watching, pay attention to any moments where the victim could have removed himself from the situation that would have allowed him to leave with his life.

When out and about, we have to be mindful of the people around us and if we ever do decide to get ourselves involved in an altercation, we need to have a plan of action if things go south.

The man responsible for the fatal blow is facing manslaughter charges, and let’s hope that justice prevails and he’s put away for an extremely long time. I’m not sure what the penalty is in Slovakia for manslaughter, but he’s got what’s coming to him regardless.

Previous article: Rock Island Armory TCM: The Gun You Didn't Know You Needed Until Now Next article: #DIGTHERIG - Gary and his Springfield XDs MOD.2 in a Versacarry Holster