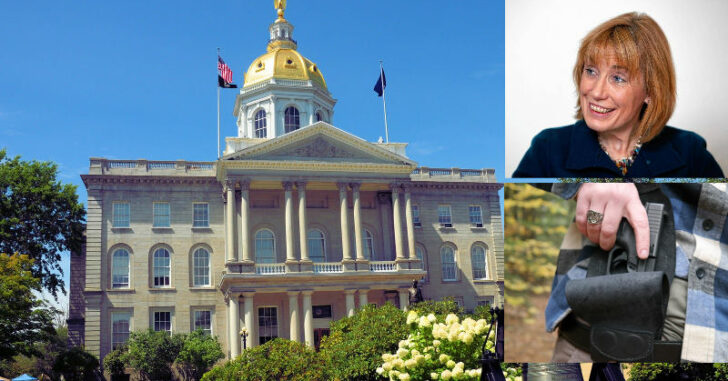 CONCORD, NEW HAMPSHIRE — The New Hampshire Legislature is once again on the rise with proposing and passing in the Senate and House agreeing that it’s time to dispense with concealed carry permits altogether. Governor Maggie Hassan has swore that she will veto the measure if it makes it to her desk — just like she did last time.

Senators remained steadfast as they passed the measure, voted precisely along party lines.

via the Union Leader

“This is our opportunity to ensure the 2nd Amendment rights of our constituents are upheld,” said Sen. Gary Daniels, R-Milford.

Governor Hassan wasted no time in basically saying what the House and Senate both agreed on is nothing more than a worthless gesture.

“Governor Hassan does not believe we need to change New Hampshire’s current concealed carry permitting law — which Republican Mel Thomson called a ‘sensible handgun law’ and has worked well for nearly a century, safeguarding the Second Amendment rights of our citizens while helping to keep the Granite State one of the safest states in the nation,” said Hassan’s communications director, William Hinkle.

It leaves me guessing, as a former resident of New Hampshire, what the whole point of the Senate’s gesture was. Last time, the vote went almost precisely by party lines. With Democratic Senators pretty much in fortified positions on the floor, there’s no chance the Senate could achieve the 2/3rds majority to override Hassan’s veto.

Is this election year gibberish or do these politicians actually believe New Hampshire residents shouldn’t need a permit to carry a loaded pistol?

I’m holding both parties to task if this measure fails. It will be a testament to good-ole-boy party politics that has consistently hurt the safety and security of New Hampshire residents. Both Vermont and Maine are constitutional carry states. Why not join them?

Previous article: Is This The Best 223 Ammo Ever? Next article: Why I Carry: Husband & Wife Stabbed By Homeless Man Trying To Steal From Store