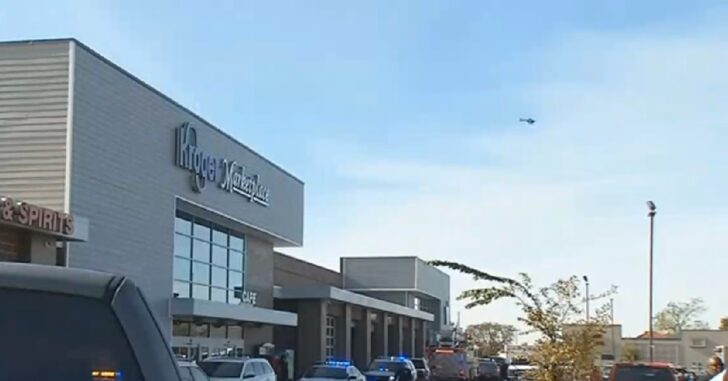 JEFFERSONTOWN, KY — A man was arrested and charged with multiple murders after engaging in a grocery store rampage that was only ended when an armed citizen engaged fire with him, WDRB reports.

The guy still got away — but who knows how many might have died without the armed citizen’s action.

Jeffersontown Police Chief Sam Rogers said his department received a report of the shooting just before 3 p.m., for the store at 9080 Taylorsville Road near the intersection with Hurstbourne Parkway.

Rogers said a man walked into the Kroger and fired multiple shots at another man in the store. That man died at the scene.

According to Rogers, the suspect then left the store and shot and killed a woman in the parking lot before an armed citizen pulled out a weapon and exchanged fire with him. Neither the suspect or the citizen were injured in that exchange.

The suspect fled to his car and reached Hurstbourne Parkway but was taken into custody nearby shortly thereafter.

Now I don’t know whether this guy targeted people he knew, people he had just gotten into an argument with, or if this would have been the beginning of a mass shooting if not for the intervention of a surprise defender. But this man murdered two people in cold blood.

There are a couple of things to take away from this, and I’m just going to cover some basics, here:

1. If you are involved in an argument on the road or in the parking lot — just leave. It’s not worth your time. It’s a known fact that some folks lose their damn minds when they get on the road and realize they have to share it with other human beings — those people aren’t worth your time. Let them be. De-escalate.

2. Whether this dude came after these people because he knew them or he just wanted to start a rampage, there’s only one way to ensue you won’t be a victim to that — carry a firearm.

That’s an easy one.

Previous article: MOM KNOWS BEST: Mother Of 3 Shoots Man After He Kicks Down Front Door. "I Would’ve Killed Him If I Had To." Next article: Does Your State Allow Being Armed While Voting?