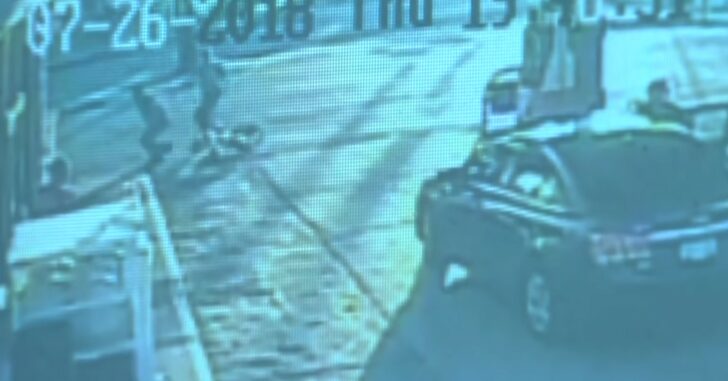 This defensive gun use, which occurred on July 26 in Milwaukee, raises a few questions. Although it starts out looking completely justified, the second part of the confrontation is likely what got the CCW permit holder charged with reckless endangerment.

The altercation was captured by a gas station surveillance camera. Here’s the video with some clarifying information below it. What do you think – is the charge reasonable?

According to TMJ4, the man on the bike is 33-year-old Thomas Chojnacki, who was carrying a gun legally at the time. His assailant is a 21-year-old who hasn’t been identified. The video starts with the attacker tailing Thomas, who is navigating away on his bike. Before Thomas can get far, the attacker jumps on top of him, knocks him over, and starts beating him. According to Thomas, the attacker was fighting to disarm him.

“He was determined to get that gun, and I know that if he would’ve got that gun, he would’ve killed me without a second thought,” Thomas said when interviewed.

The two men run out of the frame until 0:35, when Thomas is shown drawing his gun on the younger man. He walks around the parking lot with it pointed at the attacker for a while before they end up near the bike again. Strangely, Thomas hits the 21-year-old on the back of the head with his gun.

The younger man then picks something up off the ground near the bicycle. In the interview, Thomas implies that it may have been his wallet, but it’s not entirely clear. At that point, Thomas shoots the other man in the gluteus.

“I don’t understand why he wouldn’t stop,” Thomas said. “When he grabbed my wallet, the only thing I could think of was my family and what would happen if he found out where I lived.”

Both men were arrested and taken into custody. Criminal charges for the 21-year-old are still pending while Thomas has been charged with reckless endangerment. Penny for your thoughts?

Previous article: Man Trying to Make Good on a Threat He Was Arrested for Doesn't Have Time to Regret Decision Next article: Police Shoot And Kill Armed Homeowner After He Shot And Killed Intruder