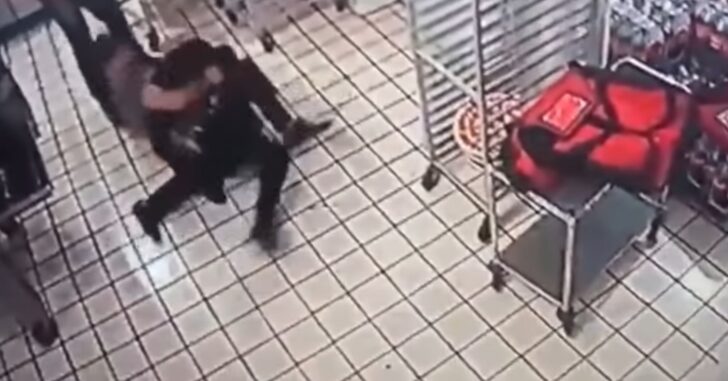 As a concealed carry site, we promote the carrying of firearms for lawful self defense. That doesn’t mean, however, that self defense doesn’t come in other forms.

Take this unarmed staff at a pizza joint, for example.

An armed robber comes in and announces his robbery, and the employees comply.

However, when the bad guy puts his revolver in his waistband, one employee finds the opportunity to strike.

And strike he did.

It’s almost sad watching this criminal get the living daylights knocked out of him repeatedly, but we can’t say he didn’t have it coming.

It’s so brutal, in fact, that the employee responsible for the beat down decides that the robber has had enough and let’s him walk out the front door.

I’m going to put a viewer discretion on this, because it’s pretty rough and bloody.

Did you notice it at the end? It would seem that when the good guys took the gun from the bad guy, the bad guy asked if he could have it back on his way out.

Something to think about as armed citizens, or anyone for that matter; how are your combat skills? You never know when they’ll come in handy. Of course in this case, the employee made a decision to get involved on that level, and it would seem that he was confident in his fighting abilities.

If you ever do get involved, make sure you are prepared. If that gun was loaded, it could have only been a matter of seconds until the bad guy got his hands on it again.