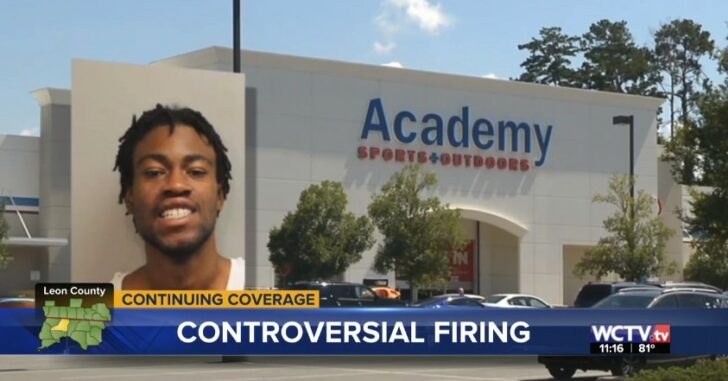 TALLAHASSEE, FLORIDA — Just a few weeks ago, Dean Crouch was a manager at an Academy Sports store located in Florida’s panhandle. He lost his job after he tackled a man who had just stolen a gun and ammunition from the store where he worked. After going against company policy, Academy Sports made the decision to fire Crouch.

“We are grateful that everyone is safe after this incident and for the quick actions of the Tallahassee Police,” Academy Sports spokeswoman Elise Hasbrook said in a statement e-mailed to us more than a week after our initial request for comment. “We have policies in place to protect our team members and customers during a robbery. While this incident ended without injuries, actions inconsistent with our corporate policies were taken.”

The incident happened on June 29th, and went a little something like this;

“My employee yelled stop that man,” Dean Crouch said. “I turned and looked and saw Mr. White running from the gun bar toward the front of the store with a firearm in his hand. At the front door is where I stopped him. I tackled him to the ground. We apprehended him, um, and detained him. We secured the firearm.”

When talking with police, the suspect stated that someone had threatened his family and that he needed to steal. “I will steal again when I get out of jail.”

He also stated that he would shoot someone and that people would see him on the evening news. This is someone who is better locked up, right?

Apparently wrong. Court records show that White was released from jail on July 6th after posting bond. His release came with a few stipulations, though.

Court documents indicate he is on “Supervised Mental Health Pre-Trial Release” and has been ordered to stay away from Academy Sports and Cash America Pawn – from which he is accused of stealing a gun earlier the same day.

Yea. That should help.

The gist of this story is as follows: A law-abiding citizen, while on the job, stopped a man from running off with a stolen firearm and ammunition. He’s fired from his job as a result.

A criminal tries to steal a firearm and ammunition, says he’ll steal again, and says that he’ll shoot someone. He’s released from jail as a result.

Crouch wasn’t even fired in person, but rather via conference call. Now struggling, his family has been forced to put their home on the market.

Previous article: Customer Goes Home, Retrieves Gun, Goes Back To Store, Stops Robbery; All Before Police Arrive Next article: Man Forced to Shoot German Shepherd Because Its Owner Couldn't Bother to Contain It