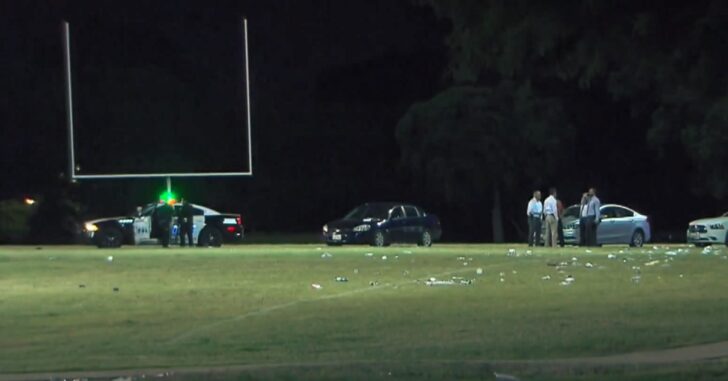 DALLAS, TX — A crowd at a local football game in Dallas was thrown into chaos when a man on a moped pulled into the field and opened fire at the crowd around him.

He (and probably at least one accomplice) injured several, but he wasn’t the only one armed in the area. It very quickly turned into a serious, intense firefight.

According to CBS Detroit:

Police said that a man then drove a moped into the middle of the football field and opened fire. Witnesses told officials that multiple people then starting firing at the shooter.

At least five people were struck by shots. A pregnant woman was rushed to a nearby hospital with a gunshot wound to her chest. After an emergency procedure, doctors said that the baby is okay. The woman, however, remains in critical condition following the shooting.

Braylon Allen-Stovall is the man who recorded the video. He was not injured, though he did dodge about 10 bullets.

The crowd was dispersing when authorities arrived at the football field. Police said that the first officers who arrived at the scene acted like paramedics, using tourniquets on the arms and legs of victims to stop their bleeding. These quick actions could have saved lives in this incident.

Crime scene investigators remained at the football field into Monday morning to collect evidence. Police have still not made any arrests in this case, but have said that they are looking for at least two shooters. Descriptions of the suspects have not yet been released.

You can check out more coverage on the incident below:

It’s hard to tell whether this shooting was a fight between two belligerent parties or between attackers and responsibly-armed, concealed carriers, but either way — the injuries inflicted were horrendous.

Thank God for the local authorities present to help perform the first aid needed to save lives.

And just like that, this reminds us of why we carry a firearm.