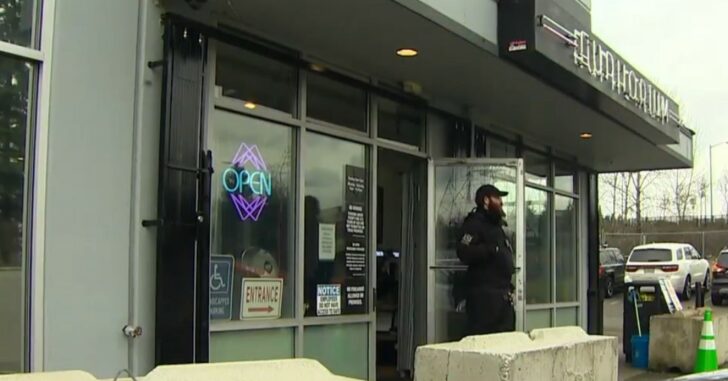 COVINGTON, WASHINGTON – A would-be armed robbery of a marijuana dispensary was foiled Thursday evening when the suspect was fatally shot by the ‘ID checker’ at the front door. The attempted pot shop robbery, which has become an almost daily occurrence in the Evergreen State, happened around 7:45 p.m. at Euphorium, located at 27623 Covington Way SE in Covington.

Ryan Evans, Euphorium’s Director of Operations gave his account of the incident to a local media outlet saying, “One of our employees was on break in his car. He exited his car and was walking back toward the store. A gentleman came up behind him out of the dark, grabbed him in a headlock and put a gun to his head and started walking him down here to the front door. Our ID checker confirmed that with him. He said ‘yes, are you serious, you are robbing us right now? This is a robbery.’ He put his attention to our security guard. And our ID checker drew his gun and fired.”

According to Evans, the man who is employed by the shop and responsible for checking the identification and age of patrons also works at the business next door, Rehv Arms. He said that the man does have a concealed carry permit and does carry a gun. King County Sheriff’s deputies are still investigating, but there has been no mention of any charges, as this appears to be a case of self-defense where the concealed carrier used lethal force to protect not only his life, but the life of a co-worker. Evans called the man a hero and wants everyone to know it.

No employees or customers were injured during the incident, and the two employees who were directly involved are taking some time off. According to the Cannabis Professionals Network, in the State of Washington alone there have been 77 pot store robberies in the 83 days of 2022, and approximately ninety percent of them have involved a gun.