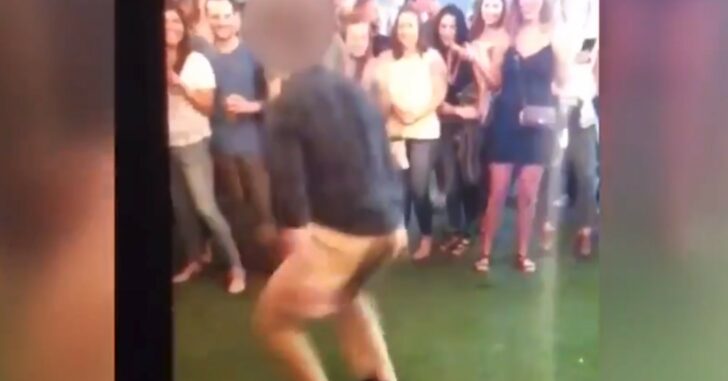 If you’re looking for an example video of what not to do as a gun owner, this one is right up there in the top few that you should watch.

Here we have an FBI agent who was out for a night of fun at a club. He was apparently the center of attention while doing some dance moves in the middle while people crowded around him.

Then just as things were heating up, he does a flip that sends his firearm up into the air and onto the ground in front of him.

As if that weren’t bad enough, he goes to pick it up and as he does, he fires off a round.

This @FBI agent was dancing at a Denver bar on Saturday night. Did a back flip, gun falls. He picks it up and a round is fired, hitting a man (he’ll be ok.) @DenverPolice investigating. #9News pic.twitter.com/MwV1WpNzAQ

This is one of those things that you have to see to believe.

The incident happened in Denver this past Saturday night. Did we mention that someone was shot as a result? Yea.

The agent was dancing at Mile High Spirits around 12:45 a.m. when he did a backflip and his gun fell out of his pants, a video of the incident shows.

When he went to retrieve the gun, it discharged, striking another patron in the leg, the Denver Police Department said in a statement.

If this guy is still an FBI agent after this, I’d be surprised. Who knows though.

According to Legal Heat, Colorado does not have any laws that prohibit concealed carry inside a bar. I’ve carried inside bars before where legal, and you can bet your butt that I wouldn’t be trying anything like a back flip. I mean, I can do it. Just not with a gun on me.

But this guy can, and he sure stole the show. Luckily, he didn’t kill anyone. That was definitely a possibility, given how irresponsible he was.

Previous article: [VIDEO] Crazy Hawaiian Fires Gun Towards Neighbor After Trying To Check On Home Next article: Armed Man Screams Threats at Driver and His Daughter Until Handgun is Produced