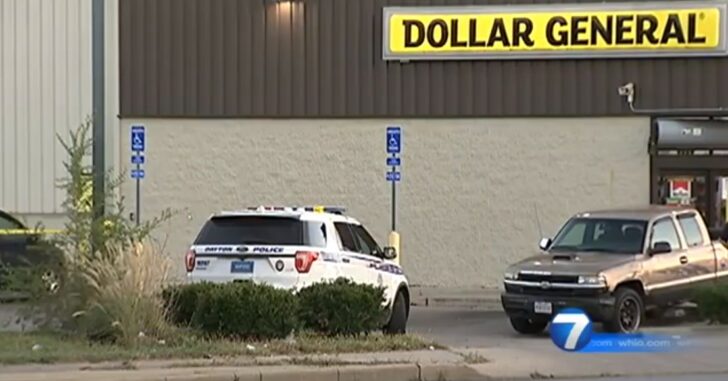 DAYTON, OHIO — A Dollar General store was robbed by a man in his 20’s, but he didn’t make off with the cash. Instead, the clerk drew a firearm and shot the suspect, who stumbled outside the store where he collapsed.

He was pronounced dead at the scene.

Here is how the events went down, according to police and witnesses;

Witnesses at the Dollar General told investigators that a person entered the store, revealed a handgun and then demanded money from the cash register, [Lt. Jason] Hall said.

A worker, who was not working at the cash register, was armed and confronted Rappley.

Witnesses said that he pointed the gun at employees, Hall said.
In a 911 call, a man told dispatchers that a man with a gun attempted to rob him at the store.

“He pointed a gun at me,” the caller said. “I had a firearm on me. I pulled my firearm and I shot him in self defense.”

The armed employee also said that the suspect, 23-year-old Roosevelt Rappley, fired back in retaliation.

Shortly after, two members of Rappley’s family spoke with reporters outside the store where he was shot and killed. Their take on things; the store clerk shouldn’t have been armed.

The sister went on record with the following statement, voicing her opinion on the actions of the clerk, even after admitting that her brother was in the wrong;

He’s got some responsibility, but not all. Right and wrong is wrong, that was wrong for that clerk to shoot my brother in the chest. Yes, he’s robbing them. Oh, well! Call the police, that’s what you’re supposed to do. You’re not supposed to take matters into your own hands.

Actually, yes, this is exactly why many people carry firearms. It’s so they don’t have to rely on police to get there in order to save them. They take their personal safety seriously, and carry the tools necessary to do so.

This is the second of ten siblings killed by gunfire, according to the siblings. It’s not known under what circumstances the other died, but Roosevelt Rappley had a choice in this case. If he didn’t try to rob the store at gunpoint, he’d still be alive.

It’s unreal sometimes, to hear the rationale of some people.

Watch the video of the interview below:

Previous article: El Paso Walmart Shooting Suspect Pleads 'Not Guilty', Even Though He Confessed When Captured Next article: The Best Argument For 9mm Over 40S&W And 45ACP When It Comes To Concealed Carry