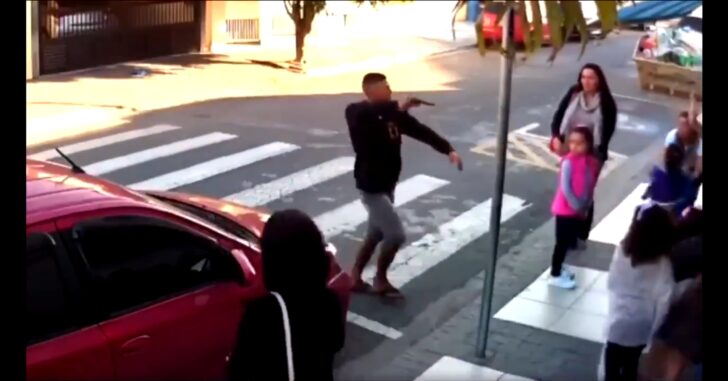 In Brazil, it’s impossible for a normal citizen to carry a firearm, and it’s not easy to even own a firearm. In order to legally carry, you’d need to be a police officer, military police, or similar.

The below video of a woman defending herself and her child with a firearm is pretty much unheard of in this particular country. But how was she able to carry the firearm? Reports say that she’s a member of the military police, and has the unique position to be able to defend herself.

THIS is the beauty of concealed carry. A sick man walks up to a group of women and children and tries to rob them. A good woman with a gun takes care of him! If she had no gun, they’d likely have all been dead/injured! pic.twitter.com/X1YVzV3djr

The woman was pretty precise with her actions, both hitting the suspect and making sure the firearm was out of his reach. She then held him at gunpoint until more help arrived.

A news station in Brazil reported the following:

A military off duty police officer, who had gone to a Mother’s Day celebration at the school where her daughter is studying in Suzano , shot a suspect in front of the unit. According to the Military Police, the 21-year-old suspect was carrying a .38 caliber revolver and had already approached other mothers awaiting the opening of the gate, as well as having searched the school’s security to see if he was armed.

Long story short, this should be an eye opener for the citizens of Brazil. Some are currently fighting for their right to be armed again, but it will be a slow going process. The country gave up these rights, and has since seen crime rates skyrocket. The only ones armed are the bad guys and the police. That’s a recipe for disaster for the average citizen.

And in case you’re wondering, the bad guy didn’t make it.

h/t The Truth About Guns

Previous article: Woman To Intruder: "If You Take One More Step, I'll Kill You" Next article: Bad DGU? Las Vegas Concealed Carrier Shoots At Car Thief, But Was It Worth It?