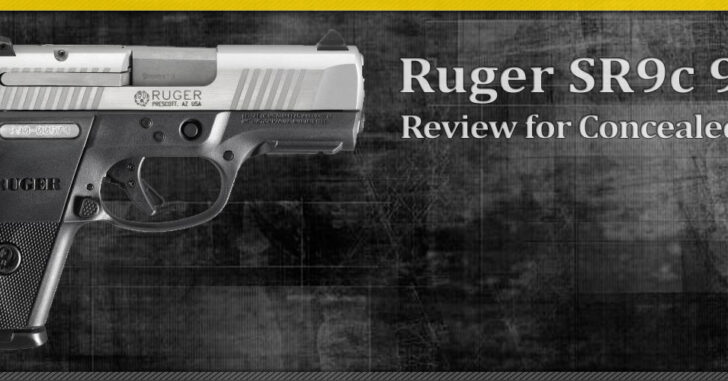 The Ruger SR9c is one of many firearms in the SR series. I purchased mine a little over two years ago, and it became my primary carry gun shortly after. It rides in a Crossbreed Supertuck holster inside my waistband. This version of the SR series is chambered for 9mm. The compact SR is also available in .40S&W for those who like the extra stopping power, but at the expense of 1 round in the compact magazine, and 2 rounds in the extended magazine. The 40c is identical to the 9c in length, width, height and weight. Having fired both I can say that the 9c is unsurprisingly a little tamer in recoil. Muzzle rise is reduced due to a low slide profile. Overall it is a very easy and fun gun to shoot.

There are numerous safeties on this handgun – one of the many reasons I love it.
It has a Glock-like “trigger within the trigger”, internal trigger bar interlock and striker blocker, magazine disconnect (more on this later), plus a visual and tactile loaded chamber indicator on the top of the slide.

It also has an ambidextrous manual thumb safety. This is an area where there will never be a consensus. The SR9c has a relatively short trigger (when compared to, say, an LC9) and as such I like a manual thumb safety. I have some guns with and without them, and for guns with long, heavy triggers (such as my LCP or my Sig P250c) the lack of manual safety is fine. For this, though, I like to have one. I treat every gun as if it has one anyway, as it does not matter if I sweep off the non-existent safety on a gun that does not have one. In this case, it is small enough to not get in the way, but large enough to be easy to hit when you need to. It ‘snicks’ on and off cleanly and positively.

To me, reliability is one of the most important factors of a personal defense weapon. If I am going to stake my life (or that of my family) on the fiream then I need to know it will go bang in my moment of need.

I have put several thousand rounds through this handgun, and I have yet to have a failure of any kind. If I could not say that about the gun I would not carry it.

The grip has a fine checkered texture, with fine grooves at the front and back. I find it is rough enough to gain a solid purchase without hurting my hands. It has a reversable backstrap, allowing it to be adjusted to fit smaller hands. As someone with relatively small hands myself, I love this. I find it fits my hand perfectly on the smaller setting.

It comes with two magazines. One is a flush-fitting 10-round magazine (with interchangable baseplates – one flush and one with a “pinky” extender) and the other is a 17-round full-size SR9 magazine with a sleeve to cover the extra length. This makes the grip the same as that on a regular (full-size) SR9. In juridictions where law-abiding citizens are restricted to 10 rounds, the firearm will ship with two 10-round mags. I prefer the pinky extender on the 10-round mag, and carry the 17-round mag for backup.

It also comes with a basic magazine loader. This is not essential, but does make loading a little easier on the thumbs, especially with the 17-round magazine.

It has an ambidextrous magazine release.

As mentioned earlier, the SR9c has a magazine disconnect safety. This is one of the very few things I dislike on the firearm. I do not like magazine disconnect safeties at the best of times as they render the firearm unuseable during a magazine change. In this case, it is, in my opinion, a particularly poor implementation. Why? Because unlike most handguns with this “feature” (that usually either prevent the trigger from being pulled, or just do nothing when the trigger is pulled), this one “clicks” and decocks, requiring one to cycle the slide at least 1/2″ (potentially ejecting the round in the process if you retract the slide too far – easily done when the pressure is on…) to make the gun useable again. However, a reputable gunsmith should be able to disable this for you should you wish.

Ruger states that the SR-series may safely be dry-fired, as long as the magazine is in place. Do not dry-fire without the magazine in place, as damage or wear to the magazine disconnect mechanism may occur. I recommend using snap caps anyway.

It also has an accessory rail for lights, lasers, etc.

They are available with brushed stainless or black nitride slides. For concealed carry I prefer the latter.

The firearm is very easy to strip and clean, once you know the trick. You need to remember to push the ejector down once the slide is retracted. The takedown pin is pushed through from the right-hand side of the gun. It can be a little stiff the first few times – I used a drift initially – but it soon became easy to push through with my thumb unaided. I can field-strip the gun in a matter of seconds now.

As you have probably gathered from this review, I Love This Gun. At the time I purchased it the MSRP was $525 – I got mine from my local dealer for $400 + taxes. For what you get, it is a great deal. It is accurate, feels good in my hand and has very manageable recoil.

I am 45 years old, 5’10” with some, er, middle-age spread. My “spare tire” can make IWB carry a little unpleasant with some firearms. I have no such problems with the SR9c.

One very minor issue. The outside of the barrel had some noticeable tooling marks – a quality ‘ding’ that I would not expect on, say, a S&W or a Sig. It has no impact on the firearm’s function. Also, make sure to field strip and clean the gun before using it for the first time, as Ruger tend to lubricate them with a relatively thick grease from the factory.

I am very impressed with this gun. In terms of “bang for the buck” I feel this firearm is a great buy. I trust it with my life. It was chosen as the Shooting Industry Academy of Excellence’s Handgun of the Year in 2010, and I believe it was well deserving of that honor.

Previous article: Join our new Forum Next article: Traffic Stop while carrying concealed; What to do if you're pulled over