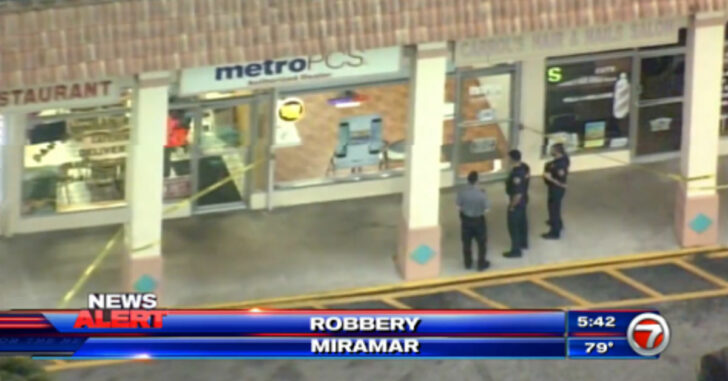 MIRAMAR, FLORIDA — Three people robbed a Metro PCS store in Miramar only to discover that the clerk had a gun. The three culprits managed to escape the store before the clerk chased after them, firing upon their escape vehicle. Police are at a loss to identify any of the three people responsible for the crime but have not immediately charged the clerk with any wrongdoing after he charged after them.

According to 7 News Miami, the suspects are still not identified and it is not known whether any of the three were hit.

I guess it pays to carry a handgun at work. Not really sure how this stops a violent felony in progress. Not really sure it’s worth getting shot at over stolen cell phones. Did we learn any lessons? Sure. Carry a gun at work. A gun is a bit more helpful if you’re able to use it before you get violently robbed.

Moreover, nothing in the news report explicitly suggests that the robbers were armed but it did sound like maybe some shots were fired from within the store. They may have just run in, grabbed some phones, and run out OR one of them may have let off a couple rounds. The details of this report are forthcoming so if anything comes of it, we’ll let you know.

The basics are this: it’s better to be prepared and not need it than to need it and not have it. We’re talking about your everyday concealed carry handgun. Wear it everyday, keep it accessible throughout the day, and hopefully you’ll never have to be stuck in the position of chasing after robbers in a parking lot after they jacked a few of your phones.

Previous article: Bad Guys Picked The Wrong Clerk To Mess With -- Now They'll All Face A Jury Next article: A New Way Of Thuggary; Be Careful When Answering The Door This Holiday Season