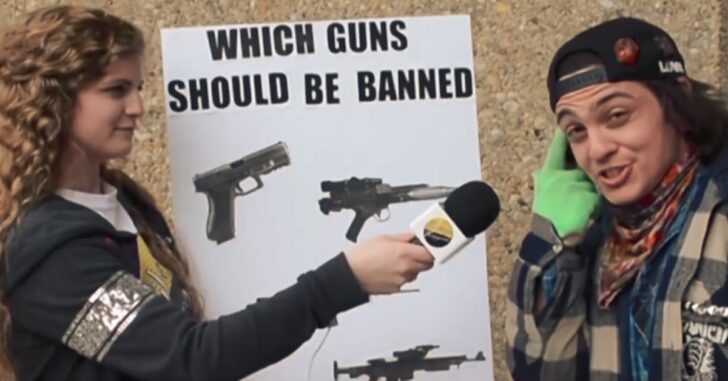 Do you like “Star Wars” or “Star Trek”? If you’re anything like me, you love both. However, I’ve got to give props to the folks over at “Star Wars” for their nuance with the firearm design, which seems to only get cooler with each new film. Perhaps the greatest feather now in their collective creative cap is the fact that some less-than-savvy folks want them banned. I’m serious. Some snit-nosed kids want to see those evil “Star Wars” guns illegal in the United States, which they were unable to distinguish from real ones on a poster. Liberty Hangout put a video together showing people doing just that, and it’s a disaster. The poster showcased a Glock 17, an AR-15, and a Mini-14 — and three imaginary laser guns, all of which are at one point referred to as “heavy artillery.” Take a look at the video below: The video collected better than 1.3 million views at the time of this writing, and thank God. When there is such a glaring gap in the knowledge of people who vote, those who are “in the know” have got to step up when and where they can. More importantly however, is convincing the anti-gun crowd that they do, in fact, not know all that much about what they’re talking about. Are they likely to see this and be swayed? Who knows. People don’t like to be told that they’re wrong, no matter who they are and how plain the evidence is — and this evidence is pretty darn plain. We have the impetus to spread the truth — it’s our best chance at preserving our Second Amendment rights without serious conflict. What do you think about this video? Please share this video on Facebook and Twitter and tag a few friends you think need to be better informed!
Categories: General, Video

Previous article: London Mayor: "There Is Never A Reason To Carry A Knife" As Murder Rate Skyrockets Next article: Idaho Strengthens Stand Your Ground Protections