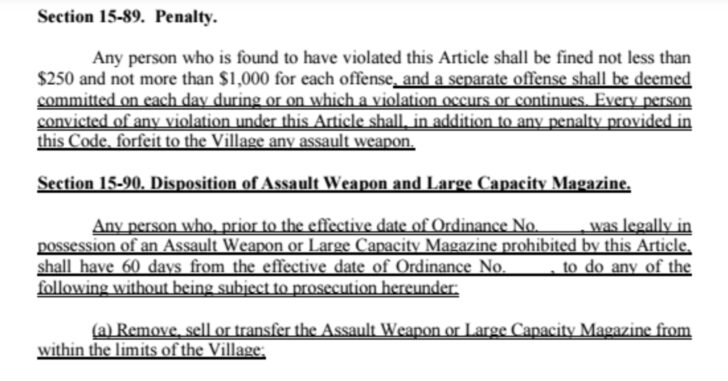 DEERFIELD, ILLINOIS — A ban was passed that outlaws certain semi-automatic firearms, and those residents who do not comply will face up to a $1,000 fine for each day they still possess the banned firearms.

Not only are semi-auto rifles affected, but some pistols as well.

This is a gun grab, plain and simple.

The amendment to the village’s gun ordinance restricts firearms village leaders define as assault weapons, such as AR-15s.

It doesn’t stop there, however. Following others footsteps, the village also wants to restrict magazine capacity.

“This is our fight. This is our generation’s fight, and we’re going to keep fighting,” said Deerfield High School student Ariella Kharasch. “Thank you for being part of that.”

Other news sites are reporting that some semi-auto pistols will also fall under the ban.

In the ordinance, the definition of an assault weapon includes, among others, semiautomatic rifles that have a fixed magazine with a capacity to accept more than 10 rounds of ammunition; shotguns with a revolving cylinder; and semiautomatic pistols and rifles that can accept large-capacity magazines and possess one of a list of other features. Among the dozens of specific models cited are the AR-15, AK-47 and Uzi, according to the ordinance.

Here is a list, not all-inclusive, of some of the firearms that fall under the ban:

The New ordinance goes into affect on June 13th. On and after that day, any resident with something on the banned list inside their home will face up to a $1,000 fine each day. That’s a little hefty.

What I really meant to say is; That’s a little unconstitutional.

How many will comply?