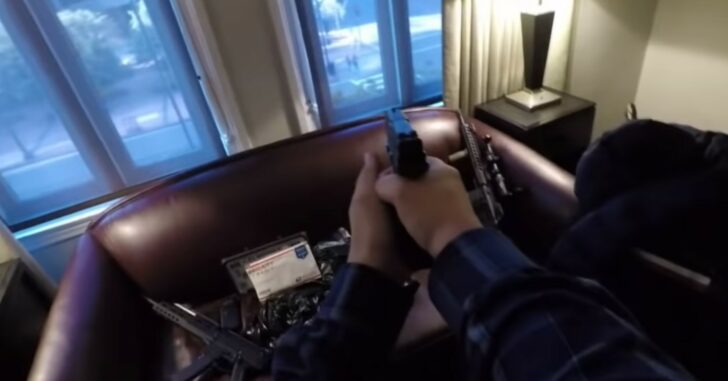 In a jailhouse interview, the man claims that he was doing “a little miniature art project”, and that he wanted to do something “fun and different”.

The man, Steven Homoki, was arrested last week after police received a tip about the online videos. Those videos clearly show Homoki pointing firearms at people as they walk on the street, and also clearly shows some pretty horrible firearm handling skills.

Steve Homoki was scheduled to be arraigned Monday, the San Diego Union-Tribune reported. He was arrested last week at his home on suspicion of possessing assault weapons, possessing high capacity magazines and child endangerment, the newspaper said.

At the very least, the guy is a moron. And at the very best, he’s an idiot.

The video below shows multiple clips that Homoki uploaded.

In a post-Las Vegas mass shooting world, where the similarities are glaring, what’s your take on Homoki’s actions?

Previous article: GLOCK Announcing New Firearm Tomorrow, Guesses Range From .22 Caliber to A Rifle With Not Many Clues Next article: First Look: GLOCK Announces The G44, Their First .22LR Pistol Ever