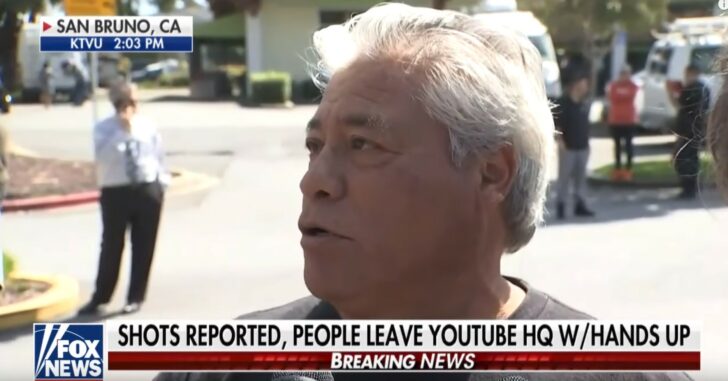 SAN BRUNO, CALIFORNIA — A shooting at YouTube headquarters on Monday claimed no lives except for the lone female gunwoman, and her motive appears to be her anger with recent changes to the online video hosting giant.

During an interview, one witness talks about what he saw and heard, and makes a statement at the end in which he expresses his desire to have a gun on his person at the time of the incident.

“You gotta be smart. You gotta be fast. You gotta think fast and smart. I didn’t have a gun on me, but I wish I did.” That’s what the witness told reporters, and it’s the most common-sense statement we’ve heard come out of this incident so far.

In a state where the difficulty level of obtaining a concealed carry permit is off the charts, it’s no surprise that everyone in the area was unable to fight back with a firearm.

The witness was at Carl Jr’s across the street at the time of the shooting, and you can see it’s proximity to YouTube Headquarters below: The shooting took place in the courtyard, and was over quickly when the attacker shot and killed herself. Police were there in minutes, but the rampage was already over when they arrived.

The woman was armed with a 9mm handgun and nothing else. The investigation continues, and it is unclear why she ended the attack rather quickly.

There is no telling what would have happened if an armed person were in the immediate area, and it’s silly to speculate, but this witness has the right idea. If you’re up against a person with a firearm who is shooting at people, isn’t it a rather sane idea to have a firearm yourself?

Previous article: Town Passes Law Banning Many Semi-Auto Firearms, $1000 Fine If Not Removed From Home Next article: Neck Stabbing Not Enough to Stop This Armed Citizen