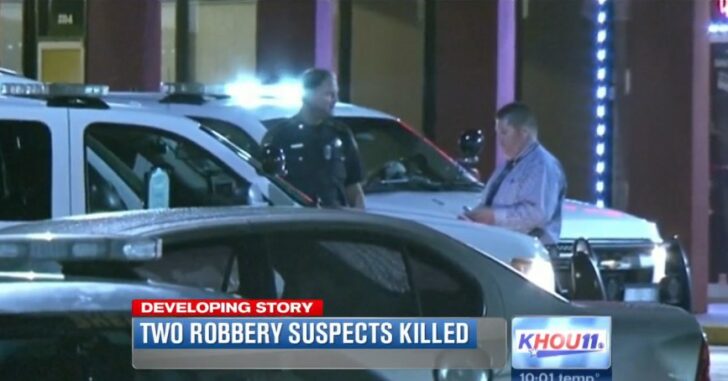 A TX man who frequents a particular bar is being sought after he shot and killed two of four armed robbers that came into the bar just after closing Saturday morning. The armed patron ignored TX state law that prohibits carrying a firearm in an establishment where alcohol is served.

This man is currently being sought by police, and will likely face felony charges. Other bar patrons, however, are speaking out about this man’s good deeds and feel that he did the right thing.

After shots were fired, the patron left, probably due to the fact that he was breaking the law.

“We’re still trying to determine who he is, and why he left the scene,” said Harris County Sheriff’s Sgt. Robert Spurgeon.

Most folks driving by EJ’s Place Saturday afternoon thought the patron there was in the right.

“He has his right to protect himself and his family and his friends,” said Charles Webb. “It’s just unfortunate something like that happened.”

Another neighbor, Danielle Russell, added, “Being a mom, yeah, I would feel safe knowing that he has a gun and he’s going to protect me in a robbery.”

But a sign in the bar window clearly states it’s a felony to carry a gun inside. Under Texas law, even licensed carriers can’t have guns in bars. That could explain why the patron left.

“Everybody in there is just a happy and nice atmosphere and everybody’s real pleasant,” said Webb. “I can’t imagine that happening there.”

Another longtime customer said that the patron who killed the robbers always stays until closing to walk the female bartenders to their cars. The friend said the man would never start anything, but would always protect his friends.

We never advise breaking the law, but it looks like this is a case where doing just that could have saved lives. The robbers entered and told patrons at the bar to get on the ground. There is no telling what could have happened next had the one armed patron not been there with his firearm.

The owner of the bar, Jenny O’Donnell, wasn’t there during the robbery but says that the entire event was captured on surveillance cameras that she has installed. She also had some kind words to say about the armed patron.

“That man was a hero,” said O’Donnell. “We could have had some bodies.”

The police also believe that the robbers in this case were involved in another robbery just hours before.

Say it with us: It’s better to be judged by 12 than carried by 6. We hope that this man was in legal possession of his firearm, and we also hope that any charges against him are dismissed. This could be the case that changes some laws in Texas.

Previous article: [VIDEO] Brutal Beating In Parking Lot After Angels Game In Anaheim; Why I Carry Next article: [WHY I CARRY] Good Samaritan In Albany NY Gets Jumped After Helping Woman On Crutches