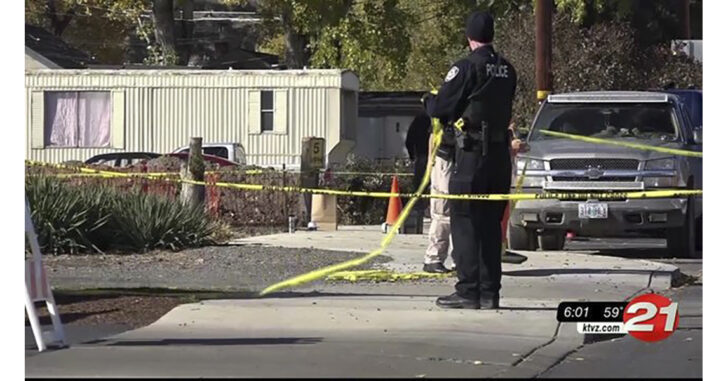 PRINEVILLE, OR — Larry Hoevet and Kenneth McBeth knew each other, but the relationship apparently wasn’t a good one. In fact, according to news reports, McBeth and Hoevet “were longtime acquaintances with a recent past history of physical aggression.” So they were evidently sideways enough that McBeth wasn’t someone Hoevet wanted to find on his property. Yet that’s exactly what happened one afternoon last October.

McBeth began knocking on Hoevet’s front door demanding the return of personal property.  When Hoevet refused to open the front door, an angry exchange of words between the two followed. This heated exchange went on for several minutes.

That’s typically when you’d want to call 911. But as people in sticky situations find out every single day, the police can’t possibly be everywhere the moment they’re really needed.

McBeth then gave a final ultimatum to open the front door or he was coming in anyway. McBeth then counted to three, picked up a nearby patio chair and threw it through Hoevet’s front window.  The patio chair and shattered glass landed on the living room floor.  During an interview at the police station, Hoevet reported he was in fear for his life as he believed McBeth was attempting to enter into his home through the broken front window.

Oregon has, for all intents and purposes, a castle doctrine law. That means a home owner has no duty to retreat and is justified in the use of deadly force if someone is . . .

(1)Committing or attempting to commit a felony involving the use or threatened imminent use of physical force against a person; or

(2)Committing or attempting to commit a burglary in a dwelling; or

Given the results of a police investigation of what happened at Hoevet’s home that day, he had a reasonable fear of any and all three of those criteria when McBeth tossed the chair through his window. And so . . .

Hoevet then described firing two shots in the direction of the broken window, striking McBeth in the left chest with one of the bullets. McBeth was able to retreat from the house to a nearby parking lot before collapsing where several citizens came to his immediate aid.

Hoevet’s actions have been the subject of a grand jury investigation for the last several months. But last week, the District Attorney announced that the grand jury has determined that Hoevet’s use of deadly force to protect himself was a legitimate case of self defense.

In this instance, the grand jury has determined that Hoevet was justified in using deadly physical force under the circumstances he encountered and it was reasonable for him to believe his life was endangered at the time he discharged the firearm from his own home.

That has to be a huge relief to Mr. Hoevet. Exactly why it took five months to determine that he was justified in using deadly force to defend his life and his property in what appears to be a straightforward case of self defense isn’t really clear. The gears of justice grind awfully slowly, especially in jurisdictions with prosecutors who aren’t believers in the individual right to keep and bear arms.

As Whiting, the District Attorney, made clear in his statement . . .

The Crook County District Attorney’s Office would like to remind the public the purpose of our local police force is to preserve the peace and ensure public safety for all. Our dedicated law enforcement officers are well trained in de-escalation tactics and have the ability to diffuse difficult situations in a safe manner.  When possible, please make every effort to call the police and request assistance before taking matters into your own hands. A quick phone call and response by an officer can quickly resolve a situation before matters escalate out of control.

The operative word here is “quick.” When seconds count, even the most responsive police officers are only minutes away. Mr. Hoevet likely avoided serious injury — or worse — by defending himself with a firearm. A reasonable case of armed self defense by any definition.