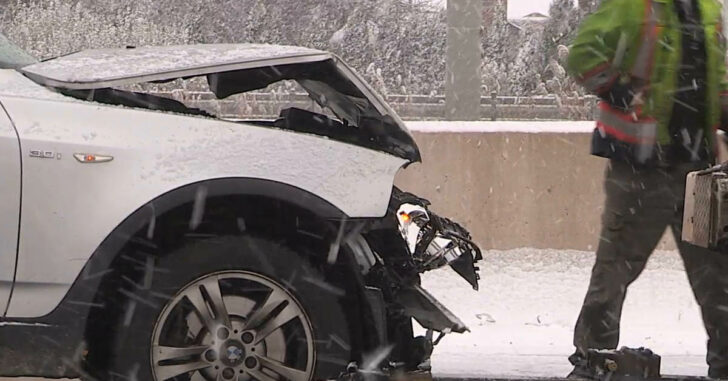 Reader: “During this past Christmas, I was driving home from the in-laws with my wife and my son in the back. We’ve been getting hit with a lot of snow where I live. It was snowing pretty hard (6-8”) and the roads were only semi-plowed.

We were on the highway and I noticed the car in front of me slam on his brakes. I hit my brakes and felt them lock up under my foot. I was only going 30 mph and just narrowly managed to stop before hitting the vehicle in front. The truck behind me slammed right into the back of our Civic. That knocked us into the vehicle in front of us and sent the car careening off into the highway median. Our car ended up skidding, too, but I managed to pull us into the breakdown lane.

The truck pulled off to the median and stood by for police to arrive. State Troopers showed up within 15 minutes, alongside an ambulance and fire truck.

My family was fine but I busted my nose on the steering wheel and was bleeding pretty bad. The medics came over and I told them I had a gun on me. One of them waved over a Trooper who started asking me questions. He asked if I was a felon and I said I wasn’t. He then ran my plates and license.

Overall, I didn’t have any problems but I was just wondering how do you recommend handling a car accident while carrying concealed?

If I had been knocked unconscious or severely injured, how would First Responders know I was armed?

Could I have recovered my gun from police if it had been knocked out of the vehicle?”

DISCLAIMER: I’m not an attorney and I’m not giving legal advice.

GH: First off, I’m glad you and your family are alright. I hope everyone else managed to do the same. I know we got socked in with snow over Christmas and thankfully I didn’t have to leave the house.

In regards to the first part of the question, I think you handled the situation pretty well. You were injured but still conscious and you let the First Responders know you had a gun on you.

Car accidents are incredibly common. Concealed carry incidents or injuries significantly less so. In fact, the average concealed carrier is far more likely to be in a car accident than he will ever use his gun in self-defense.

It’s only natural, then, that we should focus on concealed carry habits during an auto accident.

First Responders Will Quickly Determine You Are Armed

Of course, if you are knocked unconscious or rendered unable to speak or communicate, there’s not much you can do. The medics pulling you out of the wreckage will likely quickly determine you’re armed. Even more likely, though, is that they’ll see your holster and nothing in it.

At high velocities, boots come undone, bodies twist, and all sorts of wild crap happens. Even a high retention holster may inadvertently release your pistol and let it go flying inside the driver’s compartment.

I have yet to read a news story of a victim of a car accident getting shot by a pistol that flew out of a holster. Let me know if you’ve run into one in the comments section below. Until I see some stats on that, I’m going to say that for the majority of gun owners involved in car accidents, their guns are not discharging themselves due to violent impact.

If police recover your firearms, they’ll likely confiscate them temporarily. If you want to retrieve your gun from the police after you’ve gained consciousness or recovered, you’ll need to get in touch with the police department that oversaw the accident. If you have the name of the officer present at the scene, he or she may be a good resource to find out what happened.

Because of the wide array of injuries — some long lasting and others brief — it’s hard to say what each concealed carrier will be able to do after an auto accident takes place.

In general, if you trust your family to know you’re armed, let them know. If one of them is conscious and able to speak, he or she can relay the information to First Responders.

Outside of getting your pistol back after the accident, it’s also nice to know that there is a loaded pistol somewhere in vicinity of the accident and it shouldn’t fall into the wrong hands.