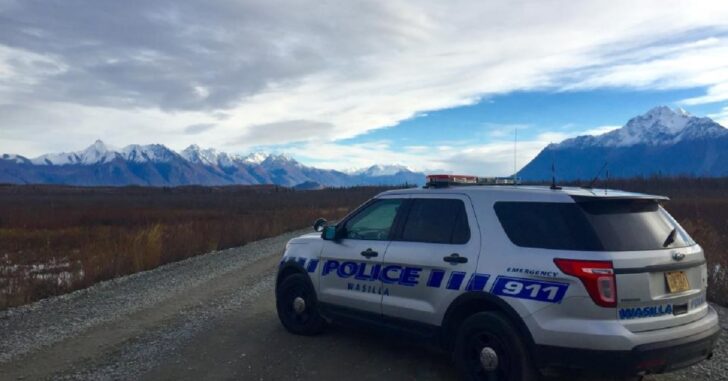 Point of fact, he was pretty sure that his friend’s house was actually being burglarized.

As Must Read Alaska reports:

Troopers were called to a residence on Schrock Road in Wasilla on Saturday at about 12:18 pm, where a man had observed a burglary in progress at a friend’s house. The man tried to detain three suspects by holding them at gun point until officers were on scene, but they ran into the woods.

When Troopers arrived, they discovered two vehicles loaded with thousands of dollars worth of items. Troopers used a canine officer team to search the area. The suspects were located and positively identified by the good Samaritan.

Arrested were three who had been previously released by the courts through the court’s pretrial enforcement risk assessment tool, which gave all three of them a get-out-of-jail-free card while they awaited their next court dates on unrelated charges:

Felisha Thomas, 31, Wasilla, who has a long history of drug abuse and related issues, with multiple arrests, including four from this year that were not yet closed cases… Ethan Kerr, 26, Wasilla, who had been arrested last year for possession of a scheduled drug (opioid), has had other brushes with the law… Joshua Johnston, 28, Wasilla, who had been released on May 5 to await trial on a Class C felony theft charge…

Johnston was on an ankle monitor when Troopers apprehended him on Sunday.

All three of them were committing crime to tide them over until they faced justice for some earlier crimes — that’s smart.

This armed man did the right thing, though — if you’re holding a bad guy at gunpoint, and unarmed one(s) particularly, and they bolt, don’t open fire. The threat was neutralized, and he successfully deescalated the situation.

It’s also worth mentioning that, any action taken, is at the discretion of the person taking that action. In other words, calling the police and waiting for them to arrive is another option, although this part of Alaska could be pretty out-there-in-the-woods, and it might take officers some time to respond. In any case, be prepared for what you plan to do.

Hats off to this good Samaritan!