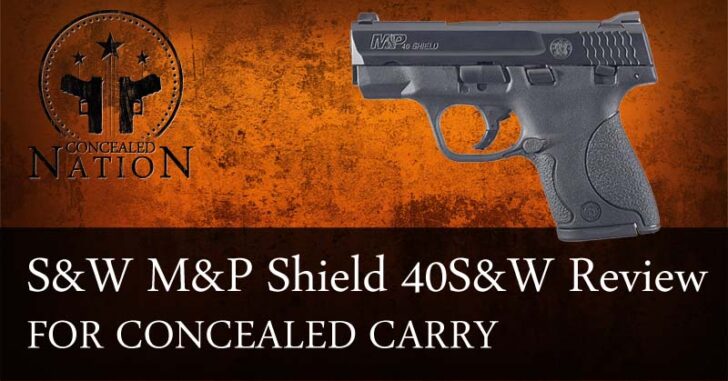 Today, we’re going to be taking a look at the Smith & Wesson M&P Shield chambered in 40 S&W. A popular firearm for concealed carry, let’s break it down and see how it holds up.

The M&P Shield, chambered in .40 caliber, has an overall length of 6.1″ and a barrel length of 3.1″.  The real winner for this is it’s concealability along the waistband – less than an inch wide (0.95″).  So if you wear a size 34″ belt, you may need to wear a 36″ belt to comfortably accommodate it in an IWB holster.

With a trigger pull of 6.5 lbs, it’s definitely a stiff pull.  That’s not a bad thing, in my opinion.  A lot of striker fires – like the Glock 19 – have a much lighter trigger pull and it’s not something I particularly appreciate.

And yes – it is a striker fire.  I’ve always felt striker fire was an ideal choice for concealed carriers because it seems to benefit the “0 to 60” mentality that self-defense situations often seem to take.  While SA/DA is my preferred carry style for full size combat pistols, this model of M&P Shield offers a lot of durability and good safety features that a concealed carrier would appreciate.

The Good, The Bad, And The Ugly

My overall impressions, after having carried the M&P Shield as my daily carry pistol, is that it offers fantastic high caliber performance in a small package.  If you want an everyday carry that fits well in an inside the waistband concealed carry holster, this is certainly a great choice

Now, there’s no surprise with this one.  With a slim form factor, there’s no room to handle recoil within the actual mechanics of the gun.  And to be honest, it was something I could get used to.  That said, for those comfortable with a more isometric grip, this is a great pistol.

While unloaded with the slide open, this M&P Shield’s slide release does not close with a light touch as it does on some other pistols I own.  This was a little annoying but not a bad thing.

For less than $450, a concealed carrier can feel confident tucking this into his IWB holster.  With a manual safety that’s accessible from either the left hand (forefinger switch) or right hand (thumb), it’s equally capable in the left or right hand with practice.  That’s something that can’t always be said for other concealed carry pistols.

The recoil spring in the M&P Shield .40 S&W is extremely durable and remained extremely taut despite putting it through some rigorous range testing.  In one instance, I put upwards of 300 rounds of overpressurized Fiocchi ammunition through it without so much as a hiccup in terms of performance.

Best of all?  It’s always reliably hit at the 20 yard mark.  Sight picture and sight alignment are fantastic and I like the ability to be able to engage targets at range. As an entry level .40 caliber pistol, it performs much better than similarly priced alternatives.  For concealed carry, it’s slimline form factor has yet to be surpassed readily in the single stack variety.  An extended magazine makes a full pistol grip possible while the standard size magazine still offers plenty of capacity.

Previous article: Another Self-Defense Shooting By A Concealed Carrier; Criminals Take Note, It's A Growing Trend Next article: Uber Driver Defends Himself With Firearm And Gets Fired, Per Uber Policy: What's Your Take?