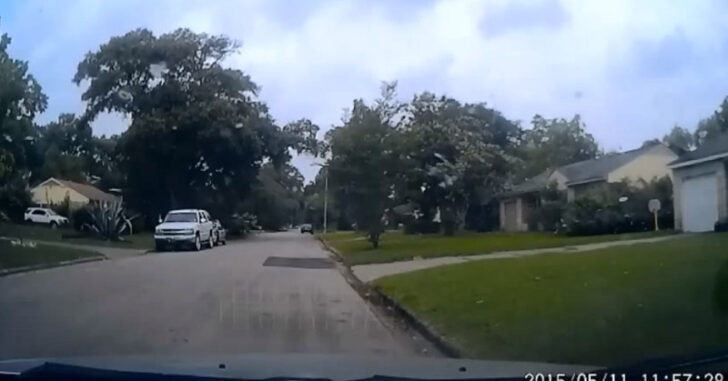 Over on Reddit, a user gave us permission to share a recent encounter he had with some thugs who were trying to carjack him at gunpoint. From the dash cam video above, you can hear the exchange before our driver finally makes his decision…

Here is his recollection of events:

Had a Glock 26 concealed on the passenger seat next to me at the time. Never really tried to use it though. In the heat of the moment I decided to run away instead. Since then I started pocket carrying a s&w bodyguard 380 as well. Never leave home without my Glock 26 on my hip or my body guard 380 in my pocket.

This is what happened behind the camera:

Would-be carjacker slams hand against driver side window, and is pointing gun at my head.

Me: Uh? Okay. Okay. Would-be carjacker: Put the car in park. Put it in park hurry up. Get out. Me: Okay. Okay.

Would-be carjacker yells to his friend on passenger side to get in. Then he accidently hit the magazine release on his gun. You can hear it hitting the pavement. While he is scrambling to get his magazine I jump back into my car.

Would be car jacker still messing with his gun. I am trying to get my car in drive.

Would-be carjacker: Bitch I will knock your bitch ass out if you don’t get out of this car right now. Get the fuck out of my car. I floor it out of there.

And there you have it. It’s a case where the decision was made NOT to draw the firearm, because the best option seemed to be to simply HIT THE GAS AND GTFO.

Your options are extremely limited when you have a gun pointed at your head. Would reaching for his Glock 26 helped him in this situation? Probably not, but who’s to say. His HIT THE GAS AND GTFO method seemed to do just fine. The bottom line is getting as far away from the threat as you can, and he did just that.

What if he were driving a slow car, or a manual? Speed wouldn’t necessarily be on his side if he needed to move in a hurry, and who knows what the guy with the gun to his head would have done.

Luckily for all of us, we don’t know.