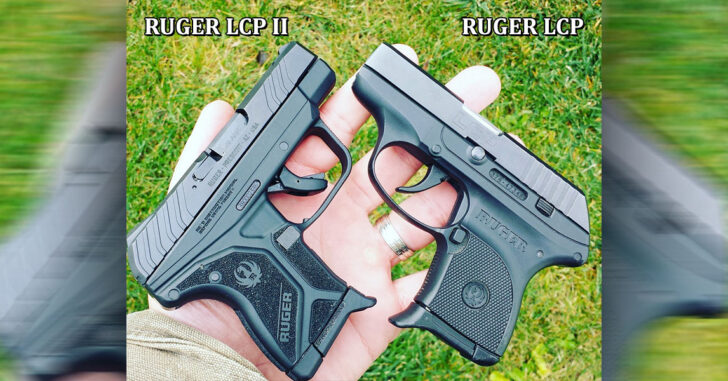 I clearly remember several years ago people waiting in lines and outbidding each other to purchase the much sought after Ruger LCP. The demand for these super light subcompact .380 acp handguns were sky high as they were sold out at every gun store and online outlet. This was at a time when record numbers of people were searching for the smallest and easiest gun to carry for CCW and the Ruger LCP fit the bill perfectly. Well, as time wore on, many other companies began to make their own versions of subcompact .380 acp handguns which forced tight competition and the Ruger LCP thrill eventually wore off.

Enter fall 2016 and the thrill is back as Ruger redesigned the LCP with a much better look, feel, sights and trigger while calling it the LCP II. Much like what Ruger did with the LC9 series, they made the LCP II with a shorter and lighter trigger that is much more pleasant to shoot. There are other feature changes that will be covered in this review however I have to say that Ruger accomplished their goal of bringing the LCP back into the spotlight.

I came up with 10 improvements that Ruger made to the LCP II so let’s get right to it. First, one cannot help but notice the improvement in the grip. Not only does it look better with more texturing on the grip along with the Ruger logo, but it is ⅛ inch thicker than the original LCP. The additional thickness is helpful to distribute recoil and offer a solid purchase especially with guys with larger hands. Second, the slide stop lever is shorter and longer. It sticks out a little further to allow for a more secure thumb push to release the slide. It’s not a major deal but it is a change for the better. Third, the slide serrations are diagonally cut with a wider gap. Ruger used this new cut for both the rear and front of the slide which will help for those who use press checks. Fourth, the sights are integral with the slide and are raised much higher than the original LCP. Albeit the LCP is not range gun for accuracy, the raised sights are sure nice when shooting from 10 yards or more. Fifth, the magazine comes standard with an extended baseplate. I remember shopping around to get an extended baseplate for the original LCP due to the loose two finger grip when shooting. The additional space is a nice way for Ruger to tell their customers they are listening to their requests. Sixth, the trigger guard is larger and more squared off. The additional space is appreciated for the winter months when many people wear gloves. Seventh, the slide on the LCP II will lock open with an empty magazine. The original LCP didn’t do that and it was frustrating when practicing magazine reloads and the trigger just to hear the “dreadful click” before you realized your mag was empty. Ninth, Ruger squared off the back end to recess the hammer in the slide. Although the LCP II remains a hammer fired pistol, one would hardly notice due to the hammer being completely shrouded in the slide. Tenth is the new and improved trigger. I think I will devote a new paragraph for that. Ruger calls the new trigger on the LCP II a single action pull. It is short and crisp which measures 5.25 pounds on my trigger scale. This is the best improvement Ruger made to the original LCP. The new trigger has a trigger bar, which provides a safety, that pulls and breaks much nicer than the original LCP’s double action pull. It feels nice on the counter in the gun store but even better on the range. The lighter and shorter pull allows the shooter to stay accurately on target with follow up shots. Double tap shooting with the LCP II is much quicker and far more accurate than the original double action LCP. Watch the video below and notice how quick I shoot double taps using the new LCP II trigger. The trigger action is by far the best improvement Ruger made with the LCP II. Disassembling the LCP II is the same as the original. Remove the magazine and assure the gun is unloaded. Pull the slide back about a quarter inch and use a knife or casing to insert under the take down pin in the middle of the frame on the left hand side. Pop the pin up and remove it from the frame. Once removed, the upper will slide off the frame. Remove the recoil springs/guide rod and the barrel. Note, there are two recoil springs that fit into each other. It is important to re-insert them exactly as they are removed. The springs are uncaptured so it wouldn’t be too difficult to misplace them when re-assembling. Be attentive to the positioning and re-insert the recoil springs the same way. To reassemble, simply perform the same steps in reverse order. When I took the LCP II to the range I had very high expectations. Having good experience with the original LCP, along with a few issues, I expected the new pistol to perform much better, more accurate and easier to stay on target. After running the first mag, I knew Ruger made this gun right. Everything from the way the gun felt to the way it fired felt great. As mentioned, the rapid shooting was quick and the accuracy was superior to the original LCP. The raised sight picture helped to stay on target to hit my 10 inch iron circle target five out of six times from 10 yards. The slightly thicker grip gave me better control and the lighter single action trigger pull was a welcome improvement. Overall, Ruger did a nice job improving the LCP II. I found the enhancements to be beneficial at the range for a far better shooting experience compared to the original LCP. I don’t hold any grudge to the original, but the new LCP II is superior. The MSRP is $349 however I am seeing it for sale around $275. Yes, the Ruger LCP is back in the spotlight with the LCP II in which Ruger made a decent handgun much better by adding several improvements, especially the trigger, to make the new LCP II an excellent addition to anyone’s concealed carry choice.

Previous article: #DIGTHERIG - Ward and his Beretta PX4 in a Blackhawk Holster Next article: [REVIEW] Blue Alpha Gear's EDC Belt Features A Hybrid Cobra Buckle -- Where Has This Been My Whole Life?!