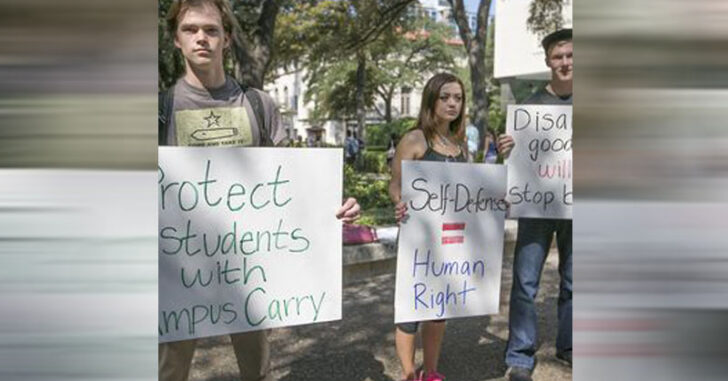 The pro-gun group Come and Take It Texas, in cooperation with other pro-2A organizations, is planning to stage a “mock mass shooting” at the UT-San Antonio campus this coming weekend. The Austin campus has been in the news recently thanks to the efforts of “Gun Free UT,” an anti-gun organization that has been agitating to make the school as restrictive as possible when the impending law change regarding campus carry takes effect next year. Gun Free UT’s latest protest didn’t draw much of a crowd, but if things go as planned, Come And Take It Texas might get quite the media turnout . . .

Gun rights groups say they will conduct a mock mass shooting this weekend at the University of Texas campus as they try to end gun-free zones.

The Open Carry Walk and Crisis Performance Event will involve actors “shot” by perpetrators armed with cardboard weapons, said Matthew Short, a spokesman for the gun rights groups Come and Take It Texas and DontComply.com.

“It’s a fake mass shooting, and we’ll use fake blood,” he said. He said gun noises will be blared from bullhorns. Other people will then play the role of rescuers, also armed with cardboard weapons.

He said the group was not seeking any sort of permit for the event from Austin or UT. University officials were not immediately available for comment, but in November, university President Gregory L. Fenves spoke in favor of a faculty resolution opposing campus-carry.

The idea is to show that concealed carry is an effective deterrent and response to a mass shooting event like the one that took place in Oregon recently. This demonstration, however, promised to be a little more high profile than the standard rally.

No matter what the pro-gun side does in terms of public demonstrations, the condemnation from the anti-gun side will be swift and hysterical. The NRA can’t even hold a meeting without Moms Demand Action trucking in a cadre of protesters to hold signs outside and condemn the them as murdering insurrectionists. This latest idea from the pro-gun side, though, might be over the line.

From an Austin based pro-gun forum:

This is just too far, I’m ALL for our 2nd amendment rights but this is batshit crazy, this won’t help our cause, it’ll just make us look like psychos.

The pro-gun group Students for Concealed Carry sent out a press release condemning the demonstration as well. From their presser:

Often, the hardest thing about fighting for licensed concealed carry on Texas college campuses is undoing the damage done by the small subset of gun rights activists who believe that theatricality and intimidation are adequate stand-ins for rational discourse and fact-based arguments. Case in point: the open carry activists who plan to stage an open carry march and mock mass shooting on the campus of the University of Texas at Austin.

They certainly don’t seem to be mincing their words. The Facebook event for the mass shooting demonstration has it scheduled for December 12th at noon. Watch this space.