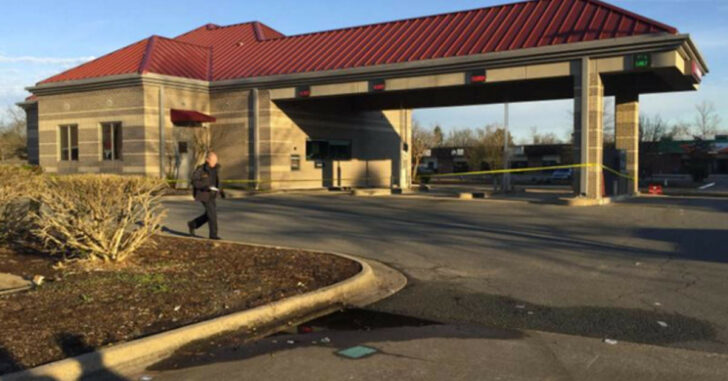 LITTLE ROCK, ARKANSAS — Two pizza delivery drivers were attempting to deposit their money after hours at a Bank of the Ozarks branch. At approximately 1:30 a.m., 35-year-old Cornell James Drones and 40-year-old Anthony Michel drew guns and attempted to ambush the two drivers. Both delivery drivers didn’t plan on going down without a fight.

According to Arkansas Online, one of the drivers managed to knock the gun out of Drones’ hand during an altercation. No sooner than the gun hit the ground, the driver grabbed it and used it to shoot Drones in the upper torso at close range. Drones immediately fled to a nearby vehicle. He drove to a gas station where he got out and collapsed.

The two delivery drivers pursued in their own private vehicle and waited for police to arrive. The police officer performed CPR on Drones but he died at the scene. When police went back to the scene of the crime and searched the area, they found Drones’ accomplice, Michel, hiding in the bushes.

Because of how Arkansas law works, Michel will now face a capital murder charge for the death of his criminal buddy. He is currently held on capital murder, aggravated robbery and felony theft. No bail has been set for Michel.

From the looks of it, both Michel and Drones must have gone to the robbery in the same vehicle. When Drones took off, he left Michel behind. Left with nowhere to run and nowhere to go, he tried to evade police at the scene.

The big problem with that is that the police tend to investigate the scene of a homicide and armed robbery pretty closely.

Drones screwed his buddy and himself. And now his buddy will face a lengthy prison sentence for Drones’ mistakes.

What a rough way to go.

As for the delivery driver that shot Drones, he isn’t expected to face any charges. Homicide detectives believe the shooting was done in self-defense and they have plenty of surveillance footage from the Bank of the Ozark branch to work with.

Police advised the public that it’s always a good idea to make large cash deposits during daytime hours. That won’t always work for some professions. Jobs where large volumes of cash are on-hand need to get that cash to a secure location as soon as possible.

The delivery drivers got lucky — and I’m happy for them. The amount of fear these two guys experienced is unreal. Thankfully for them, Drones dropped a gun he had every intention of using against them. This is a perfect example of a situation that could have been solved a lot quicker if either of the two drivers were carrying a handgun. Ideally, both should.

It’s too dangerous out in this world to be taking chances with one’s own life. Security, situational awareness, and a good handgun can go a long way to making those late night deliveries just a bit safer.