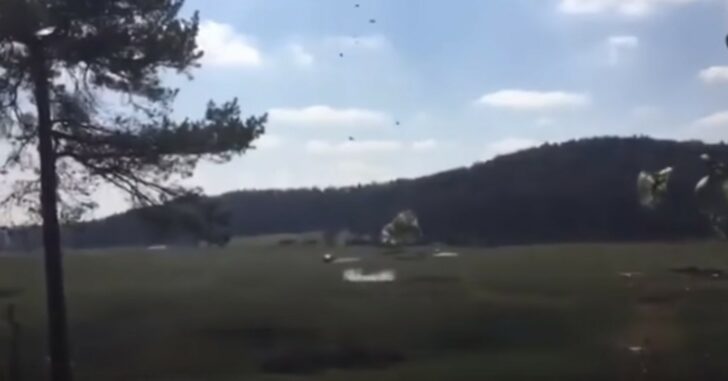 VICENZA, ITALY — A sergeant with the 173rd Airborne Brigade has been charged in connection to the destruction of three Humvee vehicles that fell to the ground during a parachute drop gone wrong, Stars and Stripes reports. What’s more, the bad drop, which occurred last year in Germany, was caught on tape — which is way more fun for us, who are not in massive trouble because of the incident. Sgt. John Skipper was charged with “destruction of government property and making a false official statement,” brigade spokesman Major Juan Martinez said earlier this week according to Stars and Stripes. A destruction of government property charge would seem to imply that the reason the three Humvees crashed (which they did in spectacular fashion) was not a routine issue — and that’s not good. If Skipper is guilty, he’s in major trouble. Stars and Stripes reports that the maximum penalty for destruction of government property is 10 years in prison. Take a look at the video below and see just how bad the damage was. https://youtu.be/kjF8ju7YeLI What do you think? Please share this story on Facebook and Twitter and let us know your thoughts on this video!
Categories: General, Video