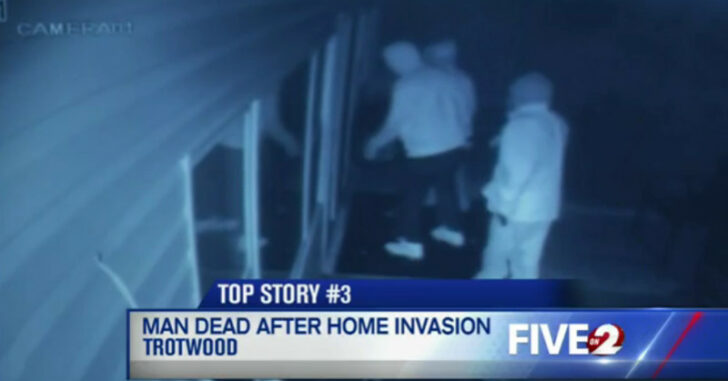 TROTWOOD, OHIO — The worst fears of a single mother were realized when three intruders broke into her home and carried her to a back room.  Thankfully, she was able to break free and shoot at least one of the intruders.  The remaining two scattered after their injured partner fell dead on the front lawn.  This really is a “guns saving lives” story worthy of attention.

According to WDTN 2, the home invasion occurred just before daybreak at 6 am.  The three home invaders were caught on home surveillance video breaking in and entering the house.  The homeowner was home with her four children when the break-in occurred.  She reported that at least one of them had a gun and all were wearing ski masks when they entered.  The one with the gun forced her back into a room.  In the interlude, she managed to break away and get to a gun in her dresser which she then used to fatally shoot one of the intruders.

Police, however, are still suspicious about the circumstances leading up to the break-in.

“There’s obviously some reason why they picked this house. We’re still not sure as to the reason or the motive,” said Trotwood Police Captain John Porter. “We do know that the male, who is divorced from the female there, uses the home still as a business address.”

Whether it was some sort of unsettled business dispute that lead to this violent invasion or something else — what’s important is that armed criminals don’t care about anyone’s family or children.  What’s yours is theirs because one of them has an illegally obtained handgun and he’s not afraid to use it.

Well, guess what?  More and more homeowners are gearing up, too.  And that means every single time three dudes decide it’s a brilliant idea to charge in through a stranger’s front door, they can look forward to meeting armed resistance… As it should be.

For us concealed carriers, we know — carry outside the house and definitely always carry within.

Previous article: Hickok45 Tells The Story Of What Happened... Next article: Sometimes, The Bad Guy Takes Himself Out