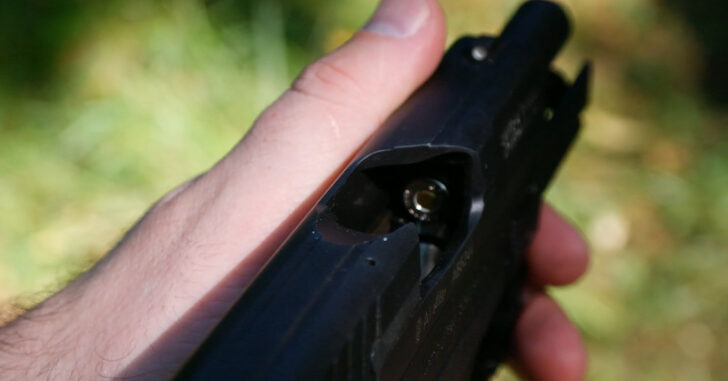 Not too long ago, we did an article discussing rotating the round that goes into your everyday carry gun’s chamber.  What we didn’t expect was how prevalent a concern this was in the concealed carry gun community.  In this article, we’re going to talk in a little more detail on what happens to the round that gets chambered into your concealed carry gun — and further guidance on how you might go about rotating it.

Ease Up On The Upper Receiver

Everyone likes that “clink-clunk” noise an upper receiver makes when it slams down on a round.  That said, the lighter you set down the upper receiver onto the round in the magazine, the lighter the impact on the cartridge casing.  If you’re at the range and planning on expending that ammunition — there’s very little to worry about.  Modern munitions and most handguns are designed within those tolerances.  The biggest obstacle we run into is the repeated impact of the upper receiver onto the same bullet casing multiple times.

One or twice?  No problem.  You can potentially keep the same round chambered in your handgun for several months (or longer) depending upon how gently you chamber that round.

Here’s the ugly part: every time a handgun bullet gets loaded into the chamber, it is going to take the force of the slide hitting it.  Every handgun is going to be slightly different in terms of wear-and-tear on the bullet itself.  There’s no all inclusive set of rules governing when a round should be cycled out.  So, we’re going to have to use common sense on this one.

Weekly Assessment Of Cycle Round

Concealed carriers tend to use specialized self-defense rounds.  These are rounds designed to expand when they hit soft tissue and, thus, have a greater impact on potential bad guys in a self-defense situation.  These rounds are usually quite a bit more expensive than standard full metal jacket rounds so gunowners are understandably more hesitant to “throw away” (shoot at the range) an expensive self-defense round.

Three Things To Look For In An Ejected Round

The back of the casing is pretty resistant to impact but, after awhile, you will see dents start to form on the back of the casing.  You may also notice dents along the side of the case.  These are especially important to note.  Dings, cuts, carves, and dents are all signs that round needs to be cycled out.

Inspect the following points on the round:

Once the round starts showing signs of wear and tear, don’t wait — cycle it out.  If you’re at home or some place convenient, cycle the rounds out of the magazine and then put the “most frequently chambered” round in first.  Stack the rest on top.

Ideally, take the round out of circulation altogether.  Throw it in a safe container where you keep rounds you intend to shoot at the range.

In conclusion, as annoying as it may be to ditch an expensive self-defense round, it’s far better to stay safe.  The biggest threat isn’t the round going off on its own, it’s usually a failure to fire or failure to eject.  None of the above are ideal for a concealed carrier using his or her handgun in self-defense.

Previous article: Virginia Must Accept All Permits Beginning July 1st! Concealed Carry Reciprocity Win! Next article: Intruder Is Shot In Face By Homeowner While Trying To Enter Through Doggie Door