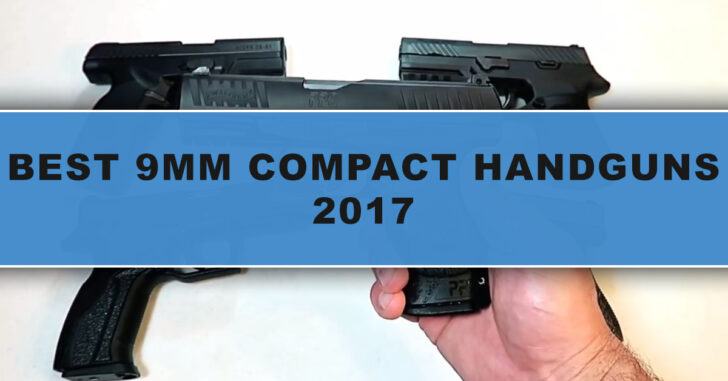 When the military decided they were going to choose a different pistol from the long standing Beretta M9, several gun companies produced new or upgraded their current models to bid for that government contract. This competition created an exciting new market of “Compact” size handguns for both the military and civilian market. Of course, we now know the government chose the Sig Sauer P320 as the new Army sidearm so what does that mean for the civilian market? It means there is a whole new class of compact sized, striker fired, polymer framed pistols available for us to enjoy. Now that so many “Wonder Nine” handguns are available on the civilian market, many people are deciding on which model will best suit their needs. I was able to review (with range time) five of the new or upgraded pistols that were released in 2017. Along with a safe full of other handguns in the compact class, we decided to break it down and offer what we feel are, “The 10 Best “Compact” 9mm Handguns for 2017.” The requirements for this list is as follows: The Sig Sauer P320 is an excellent modular pistol that offers the user the ability to change its frame size in the matter of minutes due to the serial number on the internal trigger component system. Most importantly, the P320 is an excellent shooting pistol that features the quality craftsmanship we have known to expect from Sig Sauer. The trigger is short and crisp that breaks around 6.5 pounds allows for quick and precise follow ups shots. Known for it’s reliability, accuracy, ease of use and modularity, the Sig P320 remains a solid choice for 2017. Specs: Overall Length: 7.2” Overall Height: 5.3” Capacity: 15 MSRP: $679 FN made some nice improvements to their FNS models to create the FN 509. First, the grip has a nice cross weave texture that offers a solid purchase for harsh conditions. Second, they raised the three dot luminescent sights to allow for a clear sight picture due to adding a suppressor ready barrel. Thirdly, the front and rear serrations are cut wider and deeper for a positive grasp when charging the 509. Thankfully, the 6 lb hinged trigger was not changed as the original FNS trigger is real nice. Being a fan of FN firearms, the FN 509 offers a lot of gun for the money. Specs: Overall Length: 7.4” Overall Height: 5.56” Capacity: 17 MSRP: $649 The Walther PPQ is known to have the most comfortable ergonomics and smoothest trigger that the polymer framed striker fired pistol market offers. The PPQ is a lighter compact size pistol by weighing under 25 ounces however it shoots incredibly soft. Many gun enthusiasts consider the Walther PPQ the finest striker fired pistol on the market and are confident in carrying the PPQ as their EDC. Specs: Overall Length: 7.1” Overall Height: 5.3” Capacity: 15 MSRP: $649 When CZ first introduced their P-10C model, it was welcomed with open arms from the gun community and CZ did not disappoint. While offering ambi controls and excellent ergos, I enjoyed the 5 pound trigger that performed so nice at the range. Right out of the box the shooting accuracy was amazing. Being consistent with other CZ models, the striker fired P-10C is an excellent addition to the CZ line of pistols and a solid choice for 2017. Specs: Overall Length: 7.3” Overall Height: 5.2” Capacity: 15 MSRP: $499 The Glock 19 is the striker fired polymer frame pistol that other handguns in it’s class are compared to. Known for it’s reliability, the G19 is by far America’s most popular carry choice. Glock handguns also offer the most after market parts available for customizing a Glock pistol. A common choice for law enforcement and civilians alike, the reliable G19 sets the standard for other quality polymer framed handguns. Specs: Overall Length: 7.36” Overall Height: 4.99” Capacity: 15 MSRP: $549 (gen 3) The HK VP9 is an all around excellent handgun in the striker fired market. Offering outstanding ergos with interchangeable grip panels and backstraps, the VP9 is one of the smoothest and comfortable shooting 9mm pistols available. VP9 features include a 5.4 pound trigger, luminescent 3 – dot sights, striker fire indicator and ambi controls. HK just released the VP9SK model that includes these same features in a smaller package. Specs: Overall Length: 7.34” Overall Height: 5.41” Capacity: 15 MSRP: $719 Beretta made a bold move by creating a pistol that offers slide serrations across the entire slide. It creates a look and feel that is new and different however the APX offers much more. The APX features include outstanding ergos, smooth 6 lb trigger, ambi slide stop, modular grip frame and a 17 round magazine. Range shooting was enjoyable with first class accuracy. To top it off, the street price for the APX is in the lower $400s making this pistol and affordable choice for 2017. Specs: Overall Length: 7.55” Overall Height: 5.6” Capacity: 17 MSRP: $575 When I first held a Steyr pistol at my local gun store, I knew there was something special about this gun. The Steyr C9-A1 is their compact model that features a 3.6 inch barrel however it hosts a large 17 round magazine capacity. Being the smallest gun on this list, the C9-A1 has full size shooting accuracy as I can hit targets with amazing precision with this gun. The trapezoidal sights were different but within a few shots I learned to love them. Sporting a very short and smooth trigger, the Steyr C9-A1 is a proven and affordable choice for 2017. Specs: Overall Length: 6.5” Overall Height: 4.8” Capacity: 17 MSRP: $560 Grand Power just released their first striker fired pistol in June 2017 called the Q100 and they knocked it out of the park with this model. By using many of the features from their hammer fired pistols, Grand Power produced an extremely accurate and smooth shooting Q100. Consistent with Grand Power pistols, the Q100 uses a 4.25” rotating barrel, ambi controls, incredible ergos and a 15 round magazine. The striker fired trigger action measures a very light 4 lbs. Right out of the box I was amazed at how comfortable and accurate the Q100 was at the range. Specs: Overall Length: 8” Overall Height: 5.3” Capacity: 15 MSRP: $570 Smith & Wesson made some positive changes to their M&P pistol and called it the 2.0 and their followers loved it. They added additional stippling around the grip that is heavily textured, removed the beaver tail, added frame strength with steel inserts in the forend, added small front serrations and slimmed down the top of the slide. The 5.5 hinged trigger is quick and precise for follow up shots. The M&P line of pistols suits both law enforcement and civilians making it a preferred choice for 2017. Specs: Overall Length: 7.4” Overall Height: 5.6” Capacity: 17 MSRP: $599
Categories: General, Video

Previous article: Man Negligently Shoots Himself In The Abdomen While Seated In His Car Next article: Police Kill Gunman Who Attempted To Hijack Helicopter