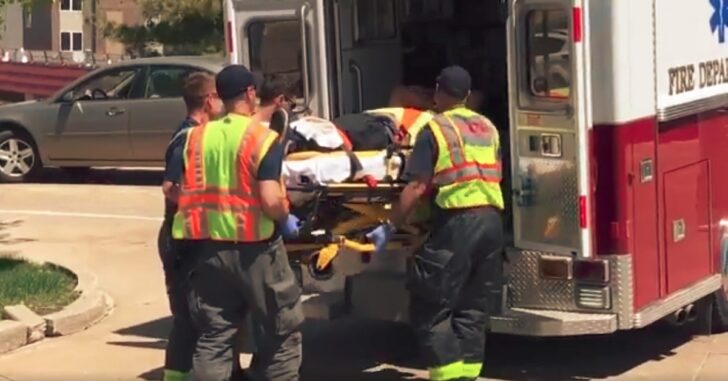 DES MOINES, IA — When one reckless and dangerous driver crashed his car near a Des Moines AutoZone, he thought he’d just go and liberate himself another vehicle.

It’s unlikely that he expected resistance, let alone getting his tail handed to him by three different people, including a concealed carrier.

That’s just about as bad as a day as it can get for a fellow, really.

As the Des Moines Register reports:

Officers were called at about 1:25 p.m. to a crash at the AutoZone at Hickman Road and Martin Luther King Jr. Parkway in the city’s Prospect Park neighborhood, police said. A man who was driving recklessly crashed his car there, jumped out and tried to steal a vehicle at the AutoZone, Des Moines police Sgt. Paul Parizek said.Set featured image

A witness grabbed the keys and held the suspect down until police arrived, Parizek said. At the scene, Des Moines police Sgt. Bob Crouse told KCCI that one of the witnesses, who had a permit to carry, pulled a gun on the man before he was detained.

“He drew down on the guy, which got his attention, and two other witnesses grabbed him and pulled him out of the vehicle,” Crouse told the television station.

No one was injured. Police recovered two handguns from the car the man crashed, Parizek said.

It would appear that he also sustained some injury was sustained to the would-be carjacker at the time of the crash or when he was taken down — possibly both. Footage is clearly shown carrying him off in a stretcher for a quick ride to the hospital.

This man was handcuffed and put in an ambulance after crashing the car he was driving at MLK and Hickman. There is more to the story. We have it tonight. pic.twitter.com/atHy1x9CmH

It’s nice when unarmed citizens intervene because they know they have to do what’s right, but is by no means a requirement.

It’s way, way nicer when they’re backed up by a responsibly-armed, vigilant citizen willing to put himself on the line to stop the threat. Although we’d prefer them all to be armed, it’s really amazing what just one armed citizen can do to bolster the effective of a group of citizens.

Previous article: BAD FORM: Armed Citizen Nearly Gets Killed by Thug Thanks to Bad Engagement Procedure Next article: Man Opens Fire on Attacking Animal In Defense of His Service Dog