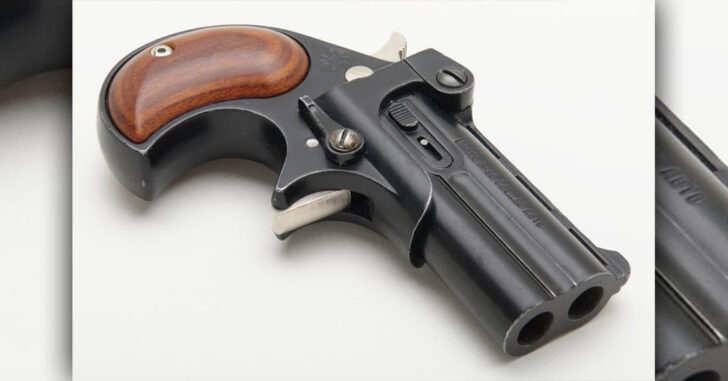 LAND O’ LAKES, FL — A man was shot by his own wife on accident in a local Publix when his wife dropped her purse and the Derringer she was carrying inside discharged, the Miami Herald reports.

The poor man, fortunately, is in stable condition.

According to a Facebook post from the Pasco County Sheriff’s Office, Publix provided surveillance video showing how a man got shot at the cash register.

Investigators say the video shows the the victim checking out at the cash register with his wife, a concealed carry permit holder.

His wife had a “Derringer 2-shot” handgun in her purse, which she placed on the counter.

The bag fell on the floor and the gun went off. The victim ”immediately flinched” and fell to the ground.

“Through the investigation, it appears that the gun fired when the purse fell to the ground and a bullet struck the victims lower right shin,” read the agency’s post. “The gun was located inside the wife’s purse and a hole was discovered in the side of the purse.”

The victim is in stable condition and no criminal charges are expected, concluded the post.

For the sake of our combined sanity, let’s ignore the ultra-technical designation of the “Derringer 2-shot”, because there are some ultra-important points here.

First of all, I’d like to bring us back to one of my first stories ever here, wherein I dropped a two-shot Derringer pistol and blew a .32″-sized hole in my bathroom ceiling. You can read up on that here, if you’re so inclined.

That particular handgun must be kept on safe. half-cock doesn’t do it. Learn from my mistake, and learn from this lady’s.

Moreover, this is a pretty strong case against off-body carry, something I can’t say I recommend to anyone. The further away you are from your defensive tool, the more a chance it has to become a liability.