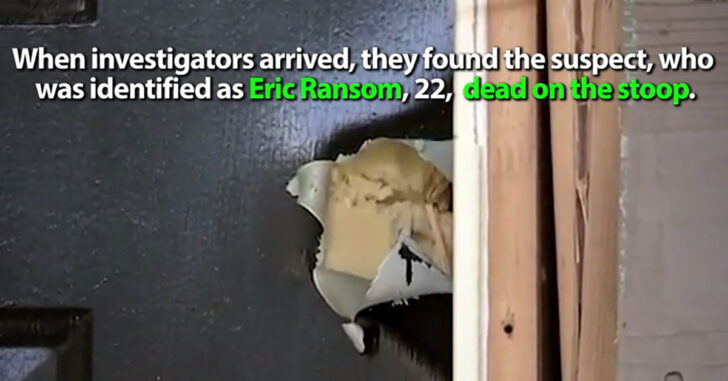 DEKALB COUNTY, GA — A young man from Dekalb County, Georgia,  was faced with the incredible burden of having to defend his life within his own home late last month, reports WFTV.

Fortunately, his quick thinking and swift action not only saved his life, but the life of his older sister, too.

Malik Hyatt, 19, found himself in the situation of his life when he heard a banging on his apartment door. That banging escalated to kicking — someone wanted in, and they wanted in now.

According to WFTV, Hyatt saw looked through a peephole in the door and saw a man outside, holding something at his side.

Police would reportedly confirm later that the man was armed, but more on that in a moment.

Hyatt calls to her sister, age 22, to go to her room, and retrieved a firearm.

Then he did something that, normally, most would not recommend doing, but this time worked exceptionally well — he fired two rounds directly into the door.

When police arrived, they found the man who had been trying to get in so hard dead right there on the stoop.

“They actually saw a male on the ground with a T-shirt on his face and a handgun in his hand outside one of the apartments,” DeKalb police Lt. Lonzy Robertson said according to WFTV.

Police said that they were not planning on charging the teen in the killing of the man now identified as 22-year-old Eric Ransom as of the time of the writing of the WFTV report.

Although the motivation in this break-in is unclear, we could not be happier that this teen was able to defend both himself and his sister.

Stay armed at home, folks, and keep your doors locked.

Previous article: Man Fires Gun From Boat For Hours, Police Intervene And Take Him Out Next article: #DIGTHERIG - Jimmy and his Springfield Armory EMP4 Lightweight Champion 9mm in a Factory EMP4 Holster