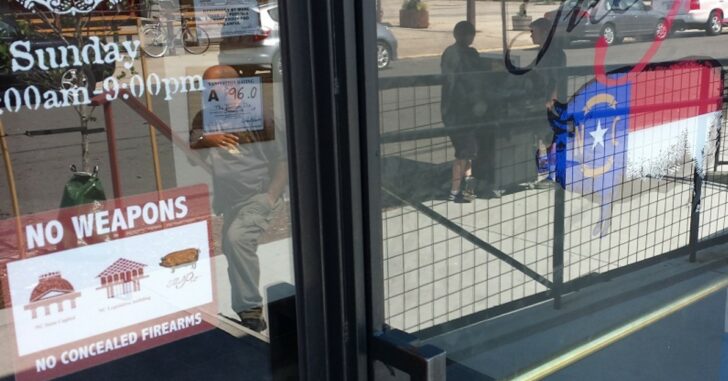 DURHAM, NC — Once again, we have been given an example of the mindset of “banning guns makes people safer” blasted to bits when faced with the brutal reality that criminals don’t operate on those rules with the news of a recent armed robbery of a barbecue restaurant in Durham, NC.

While this story is from a few years back, it’s worth sharing as another example of how ‘no guns’ signs are pretty useless.

Authorities said just before 9 p.m. Sunday, three men wearing hoodies entered the restaurant through the back doors with pistols, and forced several staff members to lie on the floor.

The bandits assaulted two employees during the crime, but they were not seriously injured.

Not only was the place robbed, but employees were hurt. They could have been killed.

That danger could have been greatly mitigated by not having a “no guns allowed” sign on their door, as Guns ‘n’ Freedom reports. In fact, I would dare go so far as to say that the management of the store endangered their employees by having that sign there.

And on a personal note — I am a NC native. I used to love this restaurant, but you better believe that I don’t go there any more. I haven’t been since I got my permit.

It’s too dangerous, and I won’t support a business that actively works to thwart the exercising of my rights.

Previous article: #DIGTHERIG - Ian and his Sig Sauer p320 SC in a StealthGearUSA Holster Next article: Flashlights, Lasers, and Optics -- When To Consider These Accessories For Everyday Concealed Carry