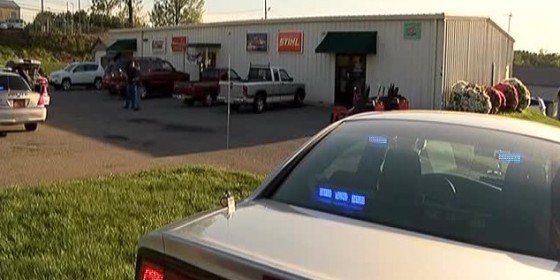 TAYLORSVILLE, NORTH CAROLINA — The son of a store owner could find himself in some extremely hot water after what he did during a shoplifting incident April 23rd at his father’s store.

The 911 call seems to suggest that the clerk then got into a vehicle and followed the men.

“I am in pursuit of a vehicle who stole a chainsaw from Beasley Power Equipment,” the caller tells the dispatcher.

“I did show them my pistol, they still took off in a vehicle. I did shoot the window out. One of them is hit,” he can be heard telling the dispatcher.

He then describes the vehicle and the direction they are going. He tells dispatch that he is “about five car lengths behind them.”

“Did they present a gun to you… or are you the owner of the store?” the dispatcher asks the caller.

“No,” the caller replies, “I’m the owner. I saw them take off, I tried to catch them and they decided they wanted to run. They both saw it.”

The man struck with the bullet, Marshall Scott Evans, is currently in the intensive care unit at a local hospital.

I love my possessions just as much as the next guy, but it’s very hard to justify the pursuit of a person who is no longer a threat to you. What makes it even worse is if you were to fire at that person. I get it. . . you don’t want the bad guy getting away with things that you’ve worked hard to obtain. I know. I understand. However, it’s not worth yourself possibly going to prison because some low-life wanted a chainsaw.

Possessions can be replaced and as far as I’m concerned, not worth going after the bad guy. No, I’m not backing down; I’m being smart. In life, you choose your battles. This battle isn’t one that a gun owner should pursue, IMHO.

The DA is currently deciding if charges should be brought against the owner’s son.

Previous article: Irresponsible Gun Owner Shoots Himself In The Leg Inside Chick-Fil-A Bathroom, Is This Rocket Science? Next article: Your First Time Firing A Gun: Share Your Experience