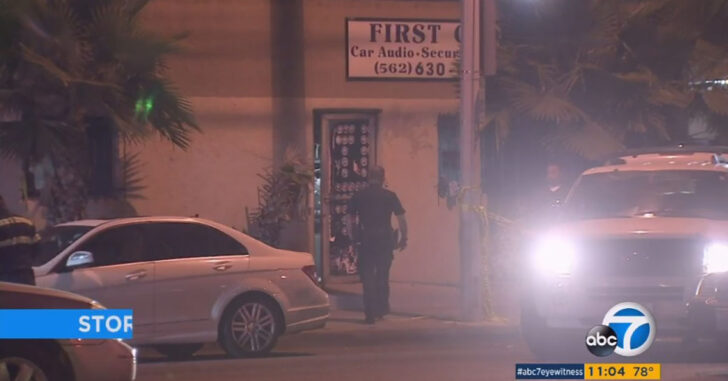 DOWNEY, CA — In a cascade of split-second thinking followed by some solid marksmanship, the owner of a car audio store stopped an attempted armed robbery cold by engaging them with his own defensive tool, killing two of the three assailants.

The shooting was reported about 8:15 p.m. in the 8800 block of Rosecrans Avenue, according to the Downey Police Department. Officers arrived to find two men dead inside First Class Car Audio.

“All I heard was gunshots — about nine or 10 gunshots,” said a man who declined to publicly be identified.

Another man said: “Everybody in the neighborhood thought it was fireworks. Nobody didn’t really pay it no attention until we see the police and everything.”

According to investigators, the third suspect had transported himself to a hospital and is expected to survive. He was being questioned by detectives on Tuesday.

“That’s the store owner trying to protect his business,” the second witness said. “He got a family and, you know, people trying to take away his business where he work hard for it. That’s not right.”

Amazingly, the owner wasn’t hurt during any of that.

That’s a pretty incredible combination of luck and skill, probably supplemented by a healthy lack of skill by the would-be thieves.

Although ABC 7 does not say whether or not the business owner was charged with anything, it’s extremely unlikely.

Another testament for the need to be armed on the job.

Previous article: [VIDEO] In Britain, The Only Option For Police Is To Run Next article: Failed Night: Man Gets Into Bar Fight, Then Gets Shot After Trying To Break Into Home