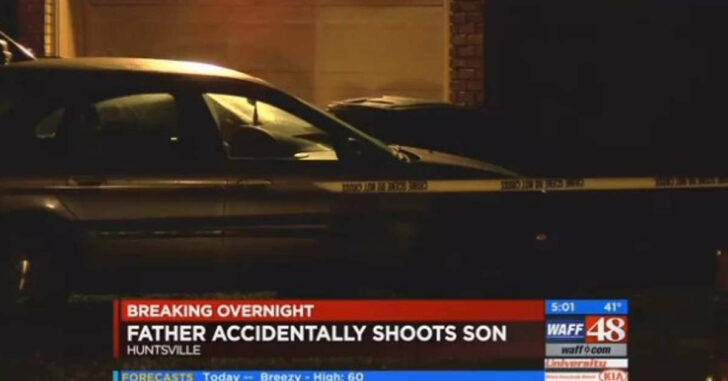 HUNTSVILLE, ALABAMA — The very worst scenario played out for a father after he mistook his son for a burglar when his son came in through the door at 1 a.m. The son was critically shot by the father. Police took him to a hospital where he remains in critical condition.

It’s still unclear whether or not the homeowner will face charges relating to the event, according to WMC Action News. Even if he isn’t charged, this is the type of tragedy all gun owners want to avoid at all costs.

Insofar as the man responded to what he thought was someone breaking into his home, I can understand the adrenaline and the anxiety. It’s stressful to wake up to loud noises at one in the morning. He may have just woken up abruptly and perhaps his son got dropped off by a friend and was not in a state to let his father know he was his son.

Communication. It’s an essential thing. And any adherence to the basic principles of firearm safety means we have to know what we’re shooting before we shoot it.

With little information from the report itself, I’d safely assume it was dark and the son may have made a bit of noise as he was getting in through the door.

This situation could have been alleviated by something as simple as a flashlight. One simple beam of light and a second or two to mentally process, that father would have known it was his son coming in through the door rather than an intruder.

These types of mistakes cost people their lives and ruin families.

I’m absolutely certain no father wants to ever shoot his son. While certain notable exceptions do exist, the vast majority of fathers usually regard their own flesh and blood with a bit more care.

For a lot of men, their home is their castle. Versus siding with caution and doing the “Evade, Barricade, Communication, Arm, and React” method, they’re going to charge out there and confront the supposed intrusion. After all, if you can’t feel safe in your own home, where can you feel safe?

But when there are other occupants of the home — or heck, even if there’s someone else with a key to your home that you trust — you owe it to them and yourself to check your targets.

It’s the reason we don’t shoot through doors or walls. It’s also why we check our targets. A simple flashlight can fix that problem. Take cover, use a flashlight to illuminate the supposed threat, and make sure it’s what you think it is before opening fire.

If you’re so bold, perhaps even try communicating. A simple “hello?” can work.

Gun ownership is a responsibility. This father had to learn a very unfortunate lesson. I sincerely hope none of our readers ever face the same.